The Urge To Merge: What A Time To Be In IT Project Management! Happy New Year! - Stoneseed

The Urge To Merge: What A Time To Be In IT Project Management! Happy New Year! 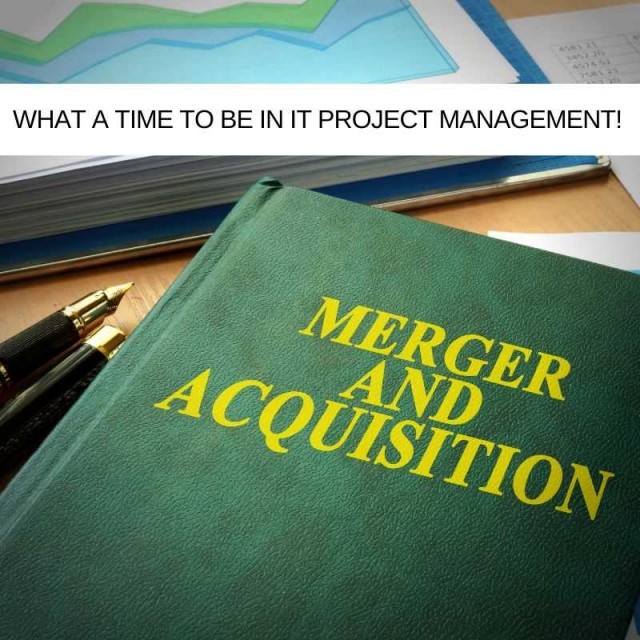 One recurring business trend of recent years looks set to continue into 2020 – and it’s great news for those of us working in IT Project Management - mergers and acquisitions! As Tara Lachapelle, writing for Bloomberg says, “We’re in an absolutely bonkers five-year run of corporate coupling that shows no sign of stopping.”

In fact, in 2019, about $2.7 trillion of deals were struck globally, it would be hard to imagine any of them happening without effective IT Project Management capabilities.

EVERY MERGER IS AN IT PROJECT

To illustrate this, let me take you back to “Merger Monday” (Monday 25th November 2019).

Two of the headline deals from a pretty dramatic day ... Viagogo to purchase StubHub from eBay for $4 billion … LVMH (which also owns brands like Christian Dior, Louis Vuitton, and Hennessy) to buy Tiffany & Co for $16.2 billion.

These two stories demonstrate the increasing value and importance of the work of IT Project teams.

Viagogo to purchase StubHub, LVMH to buy Tiffany & Co. are especially interesting from an IT Project perspective - Why?

Imagine if these buyouts had happened, say twenty years ago, and you’d been asked to point to the “IT-est” of these two mergers, it would have been a no-brainer! Viagogo, StubHub, eBay … the participants alone single this out as a ‘tech deal’, however, over the last two decades, the rate of digitalisation across all sectors now makes pretty much every deal a ‘tech deal’. As I always say, IT no longer merely supports a business; IT IS the business.

A PM friend Mal puts it like this, “I remember when I first started out on my career path, a company merger happened, and the IT Project team was tasked with upgrading the printers at the acquired business from dot matrix to inkjet. That was it! These days IT Project teams deal with spaghetti nests of systems and software to ensure the new larger entity can function. We are the lifeblood of a merger or company take-over.”

LITERALLY NOT BUSINESS AS USUAL

I remember seeing a poster on an IT Project team’s wall once that said – “Business As Usual, Until It Isn’t”.

The meaning of this was that the IT Project team was geared up to deal with anything, absolutely ANYTHING. They had structures and strategies in place that would cope with whatever their IT Projects would throw at them and they’d approach every challenge with the same calm, assured manner. Until something extraordinary cropped up, at which point they would unleash an extraordinary response.

Mergers and Acquisitions are the most extreme form of “business NOT as usual”.

For instance, who’d have thought that House of Fraser would one day be owned by Mike Ashley’s Sports Director in turn that, one day, the parent company (such an iconic name that it graced Newcastle United’s St James' Park) would rebrand as “Frasers”?

Sports Direct is so famous for its “pile ‘em high, sell ‘em cheap” business model and is seemingly, at the other end of the spectrum from the “internationally inspirational department store” that is House of Fraser. I’m not judging either, I shop at and love both, but if their instore approach differs so wildly – imagine how different their approach to IT might have been?

My friend Mal again is currently working on a merger like this that, from an IT systems point of view, he describes “like combining rugby league and rugby union”.

Mal told me, “They both use the same shape ball, and on the surface, they are roughly the same game but when you drill down they could not be more different. Imagine turning up at Wasps and telling them they’re gonna start playing rugby league or Wigan Warriers and telling them to learn the rules of union – that’s my every day at the moment.”

OUT OF YOUR DEPTH

Mal also told me that it was soon clear that his team was out of its depth. This was a really important and brave realisation.

The company leading the acquisition, Mal’s employer, still had an ambitious portfolio of its own IT Projects that needed to be delivered and hitting the pause button was not an option. The whole point of the merger was to gain greater market share – why risk that by taking your foot off the gas? Innovative, market-disrupting initiatives can’t be put on hold while you make two systems talk to one another.

Mal’s plan was to draft in Project Management as a Service (PMaaS) resources to help. In the end, they effectively outsourced all the merger work to an end to end PMO. Mal’s in-house talent could then focus on the business change projects that they’d set in motion before the merger was announced and Mal could oversee both sets of IT Projects.

Often, ‘business NOT as usual’ needs unusual reactions – or at least unusual to you. Mal tells me his PMaaS talent took everything in their stride, largely because they didn’t carry any baggage in the shape of beliefs about how things ‘should’ be done. They were able to identify best practices from both sides of the merger and create an integration plan that was in harmony with the best interests of the new business rather than maintaining a status quo of ‘how we’ve always done this’.

A merger is a great opportunity to try out new solutions, like the PMaaS market. Often new budgets are created to facilitate the necessary change – it gives you a good reason to ask for a budget increase at the very least.

Mergers and acquisitions can usher in times of uncertainty for many, corporate coupling (as Tara Lachapelle puts it) inevitably leads to cost-cutting but for those of us working in IT Project Management it can be exciting, challenging and ultimately very rewarding when companies come together – and highly pressured too.

You show me a successful merger or acquisition and I’ll show you a successful IT Project team facilitating it.

I’d go further – when considering a merger or acquisition, boards should bring in their IT Project team at the earliest possible stage or at least ensure that their IT Project operation is fit for the challenges ahead and provide the necessary budget to make this so.

I can’t wait to hear of 2020’s company mergers and even more so, can’t wait to celebrate the way that IT Project teams rise to the occasion to make them happen.