Resistance is fatal. How to drive change in a change resistant environment - Stoneseed

Resistance is fatal. How to drive change in a change resistant environment 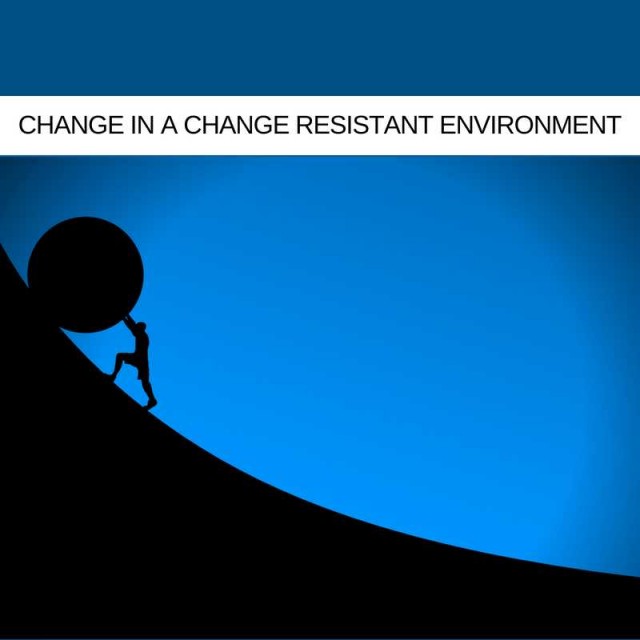 He clearly never had to manage an IT Project in an organisation resistant to change. I think we've all experienced some of our darkest hours doing this.

I was chatting to a PM friend this week and he joked that the organisational culture where he was currently employed was so resistant to change that if all the staff were on a train and it was announced that, for their destination, they should change at the next station - they'd stubbornly stay put and end up miles from where they needed to be.

Some organisations are like this, aren't they? Time and again, Project Managers are told to go and initiate strategic change only to find brick wall after brick wall.

The thing is, change is inevitable. In business, you either adapt and innovate or you die.

Most businesses are now dependent on IT so it is increasingly the responsibility of IT to drive business change and for many, this is a truth that hasn't been accepted. Amazingly, some businesses still see IT as a back-office support function, they seem to be wondering, "What the heck are the guys who come and turn PCs off and then back on again doing facilitating business change?" For strategic change to have the most impact, organisational cultures have to have evolved in line with this reality. Some have and some REALLY haven't!

Writing for ProjectManagement.com, Michael Wood says, "Most OCs [organisational cultures] grow and evolve over time. Often, they are an extension of the founders’ own values and beliefs. Other times, they are a collage of influences and practices that have just become the way things are." It has never been more important for IT project teams to challenge this status quo, as Michael puts it, "the way things are" to leverage the greatest benefit from a change programme.

1 - Know Your Own Culture

I heartily recommend Michael Wood's article for many reasons, not least because he rather usefully identifies a number of different business cultures from "Clan Culture" ("Friendly, family-like culture where people share much in common") to "Hierarchy Culture" ("Formal and structured; processes and protocols drive how people work and interact") and he suggests that different mindset is needed in each case.

Michael highlights about four cultures, in my experience, every business has its own unique culture and style and each different culture needs a different approach when it comes to managing change - just as you'd interact differently with your children if one were a teenager and the other a toddler.

Approaching Michael Wood's "clan culture" model with a copious amount of data that proves the need for a business change would be as ineffective as turning at the "hierarchy culture" with your jacket slung over your shoulder and saying, with a winning smile, "C'mon guys - trust me on this."

You need to know your culture so that you know how to interact with it, when we provide Project Management services it is one of the first things that we do - we get to know you. I can't imagine operating in any other way.

As Michael Wood puts it, "When a PM meets with extreme resistance to change, they may be experiencing a disconnect between their approach and the type of culture they are in. This is why assessing the culture in terms of what drives its definition of “good” can help the PM avoid such disconnects."

It has never been more important for clear and decisive leadership engagement throughout the lifecycle of an IT change project. That is not to say that the project sponsor needs to oversee the whole thing, but project managers do need a senior touch point in the event of an impasse. In my experience, this can come in the form of an actual physical person who can be called upon to flex some leadership muscle or as a clear document of intent that spells out the change and its importance to the business.

Whatever form it takes, little shifts resistance to change like the fear of ending up on the radar of your company's leaders. Business case is the most important thing for any IT Project, it is a PM's responsibility to ensure that a project’s and its parent business' goals and objectives are aligned. The greatest way to achieve this is to ensure that it is the business leadership - those that set the operational culture - who communicate this or, at least, openly back it!

3 - Engineer "Group Get It" Moments

When you have a group of people who perform similar roles or have a shared process at the heart of their workday, it's amazing how quickly you can convince all of them of that a change is needed by first convincing one of them. It's not that they're sheep but YOU are an outsider! Think about it - who are you coming in telling them that there's a better way of doing what they do every day? I mean - the cheek of it, disrupting their lives like this! However, when Sandra in sales order processing gets it and becomes an ambassador for your change you'll find the rest will try harder to understand. Ultimately, if you can convince users that the old status quo is no longer fit for purpose and that the change is a new, better status quo then they are usually less resistant to change.

Almost paradoxically, while you may be seen as an outsider, an actual outsider may find it easier driving change in a change-resistant organisational culture.

While the finance guys may consider you an outsider, actually, you probably share the same water cooler or canteen. In other words, you have to work with these people and, in my experience, sometimes that is in the back of Project Manager's mind when considering a more confrontational approach.

When you use talent and resources from the Project Management as a Service sector, i.e., when change is being driven by someone who won't have to stand in line for a coffee, this is much less of consideration. Resistant end users are more likely to throw a spanner in the works when they feel comfortable doing so, in other words when they know the person driving the change - familiarity breeds contempt.

There is a lot to be said for a fresh pair of eyes!

5 - Clarity of Purpose Is King

It sounds obvious and, of course, you would never start an IT Project without being clear on the intended outcome ... right?

That clarity has to be taken to another level when dealing with a change-resistant culture. The slightest chink in the stated goals of a project can wreak havoc. If there is the smallest doubt - the change-resistant will jump on it - and doubt spreads fast. To leverage maximum project success objectives are not flexible, goals and non-negotiable and this has to be clearly and authoritatively stated at the start and throughout by the organisation's leadership.

If you’re driving change in a change-resistant environment, I hope that this helps, and I would love to hear any ideas you have.

Philosopher Friedrich Nietzsche once said, “The snake which cannot cast its skin has to die."

Inability to facilitate strategic business change inevitably has the same impact on your organisation. In IT-dependent organisations, (i.e. most) it is the responsibility of the IT leadership to make change happen, for many this is a new skillset, for many more it is a natural extension of existing ones - whichever category you fall into getting better at driving change against resistance or having a contingency plan with a project services partner is well worth it.

Tags:
Best Practice Developing the qualities of a great PM
How to Rescue A Failing IT Project - And When Not ...
An IT Project Manager's guide to a good night's sl...