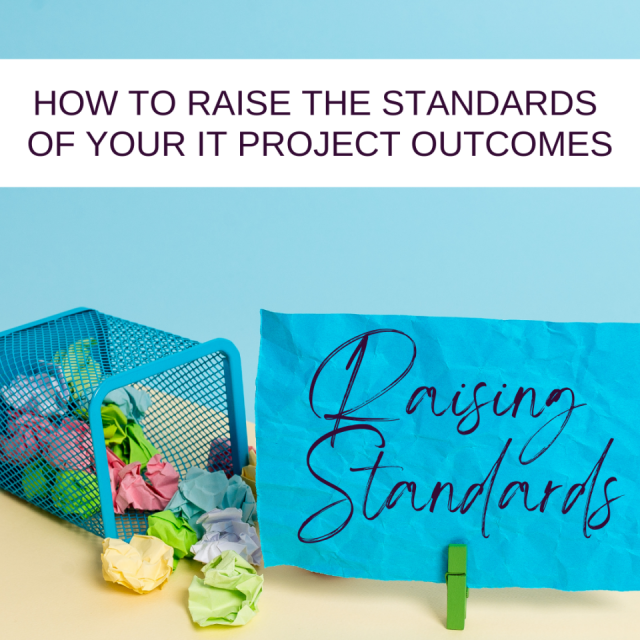 The title of this blog is possibly the most mind-blowingly obvious sentence ever! It is, isn’t it?!

I smiled when I heard Tony Robbins say something similar to an audience he was addressing, an audience who, knowing Tony Robbins, had probably spent many hours and thousands of dollars to hear what he had to say. Only to hear him say, “Raise your standards!”

BUT … raising your standards will change the way you approach your current IT Project challenges, how you feel in every second that you are working in or on your project and even how you feel about the morning alarm that gets you out of bed for work.

To raise the standards (of your IT Project outcomes), raise your standards!

Obvs! Even Tony Robbins conceded from the stage that it wasn’t the sexiest instruction, it felt a bit old school positive thinking and trite so he “relanguaged” it in a way that really caught my imagination. You have to “turn your shoulds into musts”, Robbins said. When the things you should do become the things you must do, the results you enjoy are greater!

You start a diet and exercise plan with the greatest intention, eat less unhealthily and exercise more regularly. Day one is a dream, day two and day three take more effort, day four is a struggle but you are still on track and then someone brings donuts in on Friday! You should decline. But it’s just one donut. Then it’s Friday night and the store you walk past heading back for your car has an offer on Prosecco. You should walk by, but the sun is shining and a glass on the patio sounds nice. Driving home the smell of the chip shop wafts in through the open car windows. You should drive on … you get the drift. And now I really want fizz and chips!!

It’s the same with IT Projects. We have a list of things that we should do but, for one reason or another, we don’t bubble them up to a “must do” level that would make a huge difference to our outcomes. For instance, you should regularly take a helicopter view of your project and portfolio. When you do this, you notice things that are not right, you identify misplaced resources, and you just feel like you have a better handle on things. But who honestly does this as a matter of routine? Who truthfully has elevated this to a “must do” task?

Raise your standards. Mind-blowingly obvious. The thing is, it’s so obvious that often we forget to do it.

The thing with “shoulds” is that they are stuff we’re getting round to. “Musts” are things that we need to do as if our lives depend upon it.

A client, Helen, put this all beautifully and poetically into perspective for me this week when she told me the reason why her organisation was increasing the Project Management as a Service (PMaaS) offer from Stoneseed.

“I thought of you guys … well because of the bins,” she said.

“The bins?” I asked, trying not to sound a bit hurt but feeling a bit like my client saw me as Oscar off Sesame Street. “Go on,” I said with some trepidation. I’ll paraphrase the rest because I didn’t write it down (‘hey I was doing the bins and I thought of you’ is not a chapter heading I plan for my autobiography!).

“Yeah,” she said, “working and schooling from home the kitchen bin, under the sink, seemed to fill up really quickly. Most days it was overflowing by mid-afternoon brew time at which point I’d take it out to the wheelie bin, dropping bits on the way. Don’t judge me, but I applied my Project Management thinking and set an alarm on my phone. 1pm. Empty kitchen bin. Do you know what? For about two weeks the bin never overflowed! It was lovely! Then, and I remember, it was a Thursday because it was spaghetti Bolognese night, my alarm went off, but it was chucking it down with rain, so I looked at the two-thirds full bin and thought – ‘nah, it’ll be fine’. Of course, by dinner time, the bin was like Vesuvius! That’s when I thought of you.”

Flattered doesn’t even cover it! Lol.

Her point was, if she could neglect a simple thing like emptying a bin because it wasn’t full, what wasn’t she taking care of in her projects because they weren’t presenting as ‘red flag dangers’. What could she attend to now, to save major firefighting in the future? What “shoulds” could she elevate to “musts”. On reflection, most of the Stoneseed PMaaS business from Helen has been dialling up resources to accommodate an urgent need, we do that really well by the way, but together we are working on predicting future need and having resources in place as a calm measured plan rather than a knee-jerk last-minute reaction.

The first thing I had her do was to time how long it takes to adios the kitchen bin to the outside bin, and even on the rainiest Thursday it takes just 49 seconds! It would take considerably longer to take an overflowing bin out, having to retrace steps and collect discarded refuse like you were a Womble on a mission! We often put up with a lot of pain and inconvenience that could have been prevented with a modicum of preventative action. In IT Projects and kitchen waste!

We sometimes just get so ‘into the groove’ that we do it on autopilot!

It’s like that state of hypnosis that you slip into on the drive into work – have you ever got to work and not been able to remember anything about the journey? You get so used to driving that way that it becomes second nature, a series of habits that attach together, to get you to your destination.

Could you be soooooo good at IT Project delivery now that you’re doing the same on the journey to your IT Project destination? Talking to a few IT Project leaders over the weekend, it seems that this could be the case. One told me, “Post lockdown our portfolio has gone into overdrive, and I have had days where I can’t truly remember much about what I’ve done, almost switched to autopilot. Things were getting done but I wasn’t getting much satisfaction, projects are being delivered but I sort of feel a bit like we’re phoning it in.”

Being able to deliver IT Projects on autopilot is a testament to your skill and experience, not something to be ashamed of. When you’re driving your car in a ‘zoned out state’ you’d flip back into fully conscious mode if a cat ran out or a car cut in front of you and so it is if a challenge were to arise in your project - you’d be ready to rise to face it! Not ideal though, is it?

Quick aside – there’s actual brain science behind this ‘second nature’ stuff. Did you ever read the book or see the movie “Gifted Hands: The Ben Carson Story”? Carson is a retired brain surgeon who pioneered our understanding of how the brain works in relation to our actions. To summarise his in an utterly insufficient sentence: Thoughts can change the structure of your brain, creating permanent physical pathways known as DENDRITES; repeated thoughts and actions travel the same pathways every time; these dendrites grow and strengthen the more we use them; so repeated habits become second nature.

The takeaway here is success is achieved by focusing on, and building, POSITIVE DENDRITES. So, the more you raise your standards, the more your standards raise! In a feature about the movie, in which he is played by Cuba Gooding Jr, Dr Ben Carson said, “There is a one-to-one correlation between what you put into life and what you get out of it.”

Raising your standards. Raising the quality of what you put into life … Well, it feels like a must, not a should, doesn’t it?!?!

Stoneseed is here for Project Management as a Service musts and we can help with analysis and assessment to get the best out of your delivery capabilities.

You should call us, in fact …