Knock, knock. Who's there? The no joke approach to improving IT Project performance 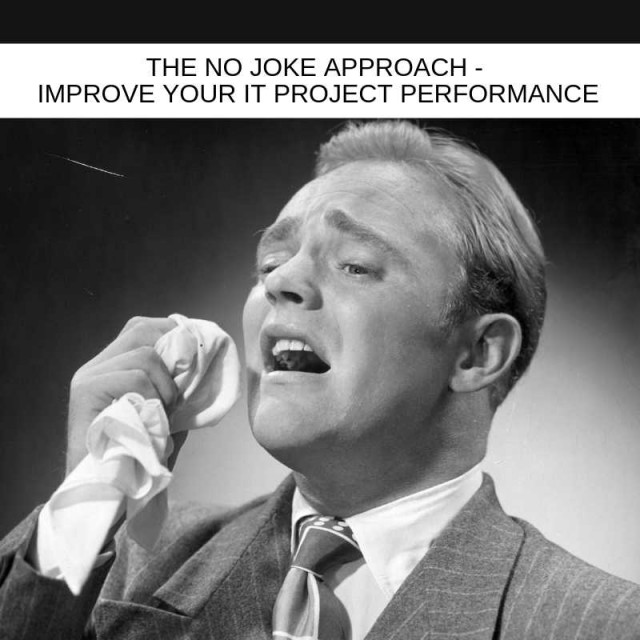 At a wedding recently, the nephew of the bride was a bit of a comedian. He was about nine years old, with a cheeky smile and we genuinely laughed when he bounded up and delivered this joke!

"Knock, knock!"
"Who’s there?" we replied.
"Hatch"
"Hatch who?"
"Bless you!" he said drily, handing us a handkerchief. Remember, the kid was about nine! Cute!

Some other guests walked into the marquee, so he moved onto this new audience.

The elderly couple laughed. We smiled.

Then a third, a fourth and a fifth couple wandered in, they were all greeted by the same joke. All of them laughed but the rest of us no longer found it funny. Around the tenth airing, someone who'd arrived before us whispered that it was really starting to grate! Poor kid!

It got me thinking though.

The joke caused a genuine reaction the first time we heard it; less so the second; even less so the third; and so on. You quickly become desensitised to something like a joke - it affects you less. So if we can do that automatically with something funny, why do we hold on to bad experiences? Sometimes for years! Why do we let negative episodes in our careers affect how we approach the here and now?

My colleague is working with an IT Project team who are struggling to innovate. Their issue isn't scope creep, nightmares with budgets, problems transitioning into service or any of the usual suspects - it is the baggage they are lugging around! The baggage of past project fails, misjudgements and miscalculations are holding them back.

What's that old adage? Why do airlines have baggage limits? Because if they didn't their planes would be too heavy to take off! So, it is with these guys. The past experiences of this team are sandbagging their potential. Their past is influencing their decisions, creating a risk-averse environment where innovation just couldn't happen! They can't take off.

There's a very primal instinct behind all this by the way! Often there is a part of us that doesn’t want to let go of past trauma because erasing the memory completely might leave us vulnerable to the same thing happening again. If it’s always on your mind then you’ll always be on your guard, on the lookout for the potential for it to recur - then can run away from it before it even starts to cause problems.

Congratulations if this sounds familiar - it means you’re human!!!! It's this instinct that kept our ancestors safe from sabre-toothed tigers and we still have it today, long after the tigers have died out.

Thing is if you are already biologically programmed to be affected less and less by that joke - is it possible to reframe your thinking so that more negative events affect you less and less over time too?

It turns out that you can! Furthermore, the results are amazing in our world of IT Project Management.

Sometimes it can take a fresh pair of eyes to point out that you've become risk-averse or that there may even be a Project Management as a Service solution to recurring challenges that eliminates any risk altogether.

That team struggling to innovate had settled into a routine of not doing so through fear of failure and as a result they were getting 'routine' outcomes. They weren't failing, per se, but neither were they setting the world alight! They were letting past experiences influence their decision making. Time and again they’d had to explain to stakeholders why their project had delivered, not with a fanfare but with a whimper. It was becoming as funny that knock, knock joke!! Something had to change.

With my colleague, they have explored the possibility that failure doesn't actually exist, i.e. it is only failure if you don't learn from it; they have compared the 'worst that could happen' with the 'best that could happen'; and they have looked at the team's three biggest failures and brainstormed possible actions they’d take should they happen again. In each case, the potential benefit from innovation outweighed the worst-case scenario and, anyway, resources from the PMaaS market could have been called upon to rescue each situation. There you go, a lesson eventually learned from each of the so-called previous failures!

There's a lot of talk these days about 'mindfulness', about living in the now rather than the past and this may be the key here. The Project Management as a Service universe has exploded with new solutions and resources since each of your past 'failures' happened. You cannot afford to approach challenges with the mindset that you had the last time you faced something similar – the world has moved on and so must our thinking.

These days, a return on investment is not an added bonus, it is a key expectation and that often comes down to the quality of the project you deliver and how it transitions into service. Accessing the most up to date project delivery tools is just not possible if your mindset is anchored in a time when perhaps fewer options existed.

Like that kid at the wedding, project’s that don’t deliver their full potential are no laughing matter. It’s time to stop being the butt of this joke.

Tags:
Developing the qualities of a great PM
When riding your IT project cycle - do you know ho...
Ian Hawley - Stoneseed Colleague Recognition Schem...