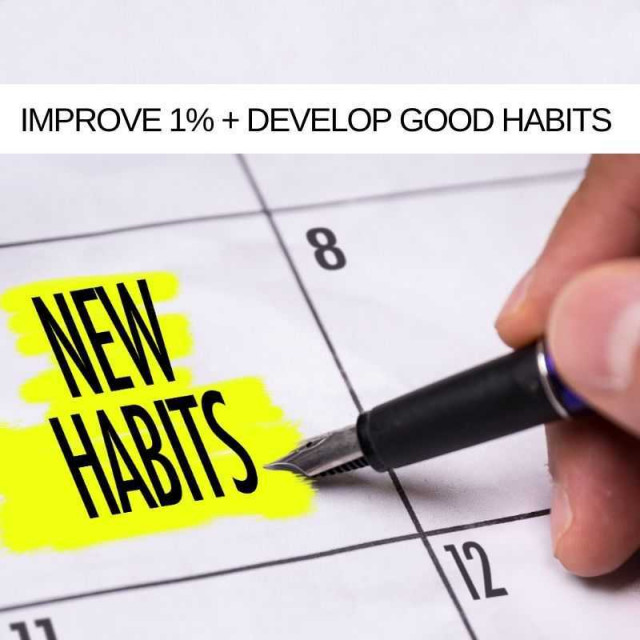 How are those New Year Resolutions holding up? After conversations with IT Project Management colleagues, friends, clients and acquaintances, it seems that there are some broad themes in the areas we have identified for improvement this year.

The first was all about managing with meaning and purpose, the second was about confirmation bias – how and why to avoid it, and this third instalment is all about habits and how just improving by 1% can make a HUGE difference.

A Project Manager friend, Malc, often says, “Methodology, resources and all the mechanics of an IT project matter but nothing makes or breaks an IT Project like our habits.”

He’s right, isn’t he? The outcome you get is a sum of the things that you do and this applies to everything from losing weight, becoming fit, getting more sleep and … managing IT Projects. If you are seeking to get eight hours sleep a night but your habit is to not hit the sack until midnight when you’re up at six the next day, the outcome of those habits will be that you fail! At work, if you aim to eliminate scope creep but your habit is to accommodate every stakeholder request – guess what!?

Liverpool football manager Jurgen Klopp, after his team’s win over Manchester United this weekend told the BBC, “The result is the result of the performance.”

It sounds like such an obvious thing to say and yet the genius of this lies in its simplicity. As he went on to say, “The performance was 100% a performance with which we should win this game today because we were the clear better side for 75 minutes.”

What Klopp means is that the way the team showed up, because of their habits during those 75 minutes, they deserved to win. Liverpool had 53% of the possession, took 16 shots of which five were on target, and earned 11 corners – United had 47% of the possession, took nine shots of which four were on target, and earned five corners. Just looking at these stats, a record of their habits, you could guess which team went on to win.

When IT Projects succeed, it is also down to the way you and your team shows up. I don’t think that we give ourselves enough credit when an IT Project triumphs – it’s because of you and your habits! Remember what my friend Malc says, “Methodology, resources and all the mechanics of an IT project matter but nothing makes or breaks an IT Project like our habits.”

Footballers celebrate every goal along the way – we should too!

We berate ourselves for our bad habits, it’s only fair that we celebrate our good ones!

Habits are all the rage again thanks to James Clear’s brilliant best-selling book “Atomic Habits”, which is all about building good habits and breaking bad ones! It’s over thirty years now since Stephen Covey’s book “The 7 Habits of Highly Effective People” and habits have interested me ever since.

It’s so easy to get into bad habits. A glass or two of wine in the evening, biting your fingernails, a Greggs steak bake for lunch each day instead of a salad, sedentary lifestyle, etc, etc. at work it MAY be allowing scope TO creep, not keep a tight rein on budgets and losing track of delegated tasks.

Getting into good habits is harder because the rewards are so far downstream.

Take the steak bake versus the salad argument. Oh my, the reward for eating a steak bake is instant isn’t it, before you’ve even tucked in!! The aroma of the freshly baked pastry!! The lovely warmth that you feel through that paper bag as you hold it in your hand!! And when you do bite into it, the taste of that crisp, flaky pastry, the flavoursome gravy and the tender steak that melts in your mouth. Then, when you’ve finished there’s always a scrap or two of flaky pastry to be salvaged from the bag or your lap … and … afterwards don’t you just feel satisfied.

The rewards for the salad on the other hand … they’re way off in the future! Sure, you’ll be able to drop a dress size or get into slimmer trousers – in six months or so. OK, you’ll be less breathless climbing the stairs – a year from now. And yeah, you’ll probably live longer … so … you get the reward for salad in six months, a year or a lifetime away?

It’s easy to see how Greggs draw you in.

And so it is with IT Project habits. Again, let’s consider scope creep. When you say ‘yes’ to a stakeholder request you’re a legend! A hero! It’s nice to be thanked, great to be popular and the rush of serotonin when you feel significant or important is scientifically proven. Instant reward. Fabulous!!

The habit of saying no to a scope change request, on the other hand, doesn’t yield benefits until, usually, the end of the project. When you can look back and say that delivery is on time because you stuck to the plan and didn’t accommodate this, that and the other.

So, what’s the answer? Can you release short term rewards while developing good habits?

One of the ways that James Clear suggests that this is possible is by creating some form of daily visual record of the good habit. So, for instance, if the good habit you want to have is that you go for a run every lunchtime – get a wall planner and each day that you stick on your trainers and jog down the canal towpath, you put a mark on that day. You repeat this the next day and the day after and that and soon you have a daily challenge of not wanting to break the sequence. It’s like Snapchat’s streak – you feel the pressure to maintain the run of ticks you get for jogging in the same way that Snapchat makes you feel bad if you break the streak of daily contact! It becomes addictive! Just like a steak bake!

You can apply this to any area of IT Project Management that you want to improve. An IT Project Manager friend was promoted recently and, as she is used to just thinking for herself, she is finding it hard knowing who is working on what and when they are supposed to deliver. The habit she is seeking to develop is checking in with all her teams and workflows on a more regular basis, and measure her inhouse capability against what could be achieved with Project Management as a Service (PMaaS) resources. Her wall chart has a big tick each day so far this year (also, in her top drawer is a huge bar of Green and Blacks dark chocolate from which she also allows herself a chunk with every mark on the wall chart – you see – instant rewards work!!).

Great habits within teams really thrive with praise. If you want your team to be mindful of budget, praising them each day that they are within forecast works so much better than saying nothing and then beating them with a stick when a project over-spends.

Reflecting on achievements allows the brain to re-live the experience, producing serotonin. This is why gratitude practices are becoming so popular. Celebrating daily successes, small goals or milestones, reminds you that you are valued. If you need a serotonin boost during a stressful, challenging day, take a few moments to reflect on past achievements and project victories and watch how habits form from the serotonin rush as you subconsciously try to recreate past glories!

Increased success in 2020 will come from surprisingly small marginal gains.

As James Clear writes on his website, “Small differences in performance can lead to very unequal distributions when repeated over time. This is yet another reason why habits are so important. The people and organizations that can do the right things, more consistently are more likely to maintain a slight edge and accumulate disproportionate rewards over time.”

Think back to what Liverpool manager Jurgen Klopp said – “The result is the result of our performance. The performance was 100% a performance with which we should win this game today because we were the clear better side for 75 minutes.”

Liverpool had one more shot on target that Manchester United. One! ONE!! There were JUST six percentage points between them in terms of possession (53%v47%), BUT, they dominated this match and won 2-0. Just shows you.

You only need to be slightly better at project managing to be a massively better project manager – just 1%. It works like compound interest! If you can maintain a slight edge today and then again tomorrow and then the day after that, etc, then the process of winning (by just a little bit) gets repeated over and over again and the habits it will form will define your career.

Tags:
Best Practice Developing the qualities of a great PM
Know when to pull in subject matter expertise! New...
Stoneseed has been named as a key vendor for PMaaS...