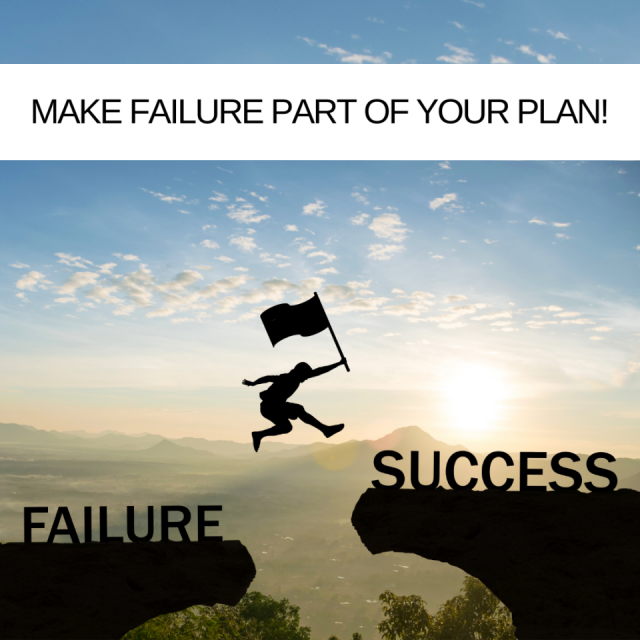 I smiled this week as a colleague said, “Failing to plan is planning to fail” and then grimaced at delivering a cliché that makes us both cringe. Like most clichéd, motivational, positive thinking sayings though, it’s become a cliché because there’s more than a kernel of truth in those words.

In his book, “Willpower Doesn’t Work”, Benjamin P. Hardy, talks about the value of planning failures ahead and explains how, in his view, not planning a response when you hit an obstacle leaves you with a decision to make in the heat of the moment.

Hardy calls this type of mental preparation an “implementation intention” and I think it’s a useful skill for us to develop in IT Project Management.  The strategy requires you to visualise not just your goals but also the potential challenges and problems - and how you will rise to overcome them.

Hardy told NBC News Better, “An implementation intention is a pre-planned response to a negative situation,” adding, “It was made before you had to use willpower … from a psychological perspective, willpower can only exist if you haven’t already made a choice.”

That’s quite a useful idea to unpack.

“From a psychological perspective, willpower can only exist if you haven’t already made a choice.”

Imagine that you’re trying to quit smoking (I’m writing this in ‘Stoptober in the UK’, good luck if you are). You’re out for drinks, you’ve reached the point where you’d normally head out to the smoking shelter in the beer garden for a ‘breath of fresh air’ and a friend holds out their open box and offers you a cigarette. If you’ve rehearsed a response, you say, “No thanks, I’ve quit. I feel so much better for it.” If you haven’t mentally practised a reaction then it’s up to your willpower to kick in and decide and, after a couple of drinks, if you’re anything like me, willpower decisions are, at best, a 50/50 chance!

When you have an “implementation intention” planned though, Hardy believes, you’ve already decided how to handle the negative situation that you find yourself in, in advance!

It’s the same for being on a diet and someone offers you a slice of lemon drizzle cake when you’re committed to a morning run and it’s lashing down with rain and blowing a gale outside, and, best of all, when you’re delivering a cutting-edge IT Project and a scope creep request threatens to throw you off course and over budget.

Hardy explains, “You say ‘If x happens, then I’ll do this’.”

In any walk of life, being broadsided by an unexpected obstacle is rarely the best time for spontaneous decision making, having pre-planned responses prevents you being at the mercy of a potential bad choice!

You’ve got experience of this, by the way, even if it feels new. If you’re a driver, think back to when you learned. What were you taught to do if your car hits a patch of black ice and skids? “Don’t break? Steer into the skid?” - If you automatically thought of these responses, then you’ve been an expert in “implementation intentions”, probably since your teens! So … how to apply it in IT Project Management?

The truth is, you probably do this already at some level, even if not consciously. When you’re hit with a challenging obstacle, one that you’ve already encountered in a previous project, you’ll call upon the memory of that experience and apply the solution that worked back then. The more experience you have, the more failures you face, the better equipped you become.

The challenge with this approach is remembering those previous responses in the heat of the moment. When your car hits that patch of ice you don’t want to be thinking, “Right, what did I do five years ago when this happened” – you’ll end up spinning into a brick wall!

Instead, you need to calmly draw upon that experience and quickly implement the solution.

It’s the same in IT Project Management. You’ll face similar challenges from project to project or come up against obstacles that other teams working across your portfolio have faced. So, it’s crucial to document these for future reference! It should certainly be part of the evaluation part of your post-delivery process – you’d be amazed how often it isn’t!

Make failure part of the plan

Even better than remembering what you did last time is predicting what you’ll do the first time!

My friend, the breakfast radio presenter Gareth Evans, openly scripts ‘ad libs’ and has a “What Next? Plan” for when something goes wrong with his playout technology – “In the chaos of a tech failure, when the only thing that works is the microphone, it’s useful to have words that can just come out of your mouth while your brain figures out how to get Elton John on peoples’ radios!”

As Benjamin Hardy notes, “It’s just planning for the worst so you can actually come out a victor in that situation.” To be effective, your implementation intention needs to be specific, according to Hardy. If it’s too broad, then you probably won’t default to it in an emergency.

So, off the top of my head, in IT Project Management, your challenge might be about how to deal with a stakeholder scope creep request. Your specific “implementation intention” might sound like this: “When faced with a request that alters the scope, ask if it benefits the project’s business goal if it can be delivered within budget and the agreed timescale. Communicate this with the stakeholder and either decline the request or renegotiate budgets and timelines.” Share this approach upfront, at the start of the project!

You see how visualising the specific challenge works best? Imagine if the same stakeholder had popped his head around your door and asked if you fancied a brew. Saying, “Hmm, does it benefit the project’s business goal, can it be delivered within budget and the agreed timescale?”, sounds a bit weird and you’ve talked yourself out of a nice cup of tea! I’m being flippant, but you take the point. Radio presenter, Gareth’s playout failure plan wouldn’t work if it was the transmitter that had failed. He’d just figure out a way of playing Elton John to himself!

There are no new problems, they’re just new to you

It’s reassuring to know that, in most instances, the problem that you are facing is not totally unknown. Someone somewhere will have trod the same steps and come up with a solution. There’s no shame in seeking out that solution.

Nottinghamshire based HR lawyer, Nickie Elenor has a similar philosophy and approach, “When you’re dealing with peoples’ lives and livelihoods it’s vital that you’re decisive and fair. Dawdling and procrastination only make things worse. Few employee challenges are new but, chances are, they’re new to you and that’s what causes the stress! It’s essential to have someone with a calm ‘plan for everything’ in your phonebook. Whether that’s HR advice, central heating, or IT issues!”

Stoneseed’s IT Project Management services gives you access to years of project experience, from many industry sectors. Our team of Project Management and Technical Professionals, delivering services through a flexible, on-demand resourcing model, are your “someone with a calm ‘plan for everything” – and they’re just a call away. From strategy to service delivery, the cost-effective model for project delivery, underpinned by Stoneseed’s PMO, methodology and toolset, will flex to support your project needs… whatever challenge you’re facing.

We don’t do central heating or HR advice … or for that matter Elton John though. For IT project delivery challenges issues, though, calling 01623 723910, should be your specific “implementation intention”!

Focus on the solution – not the problem.

Finally, when making failure a part of your plan – focus on the solution, not the problem.

Tony Robbins shares a story about when he was learning to drive high-performance racing cars and what to do when the car skids (hopefully you’re thinking “Don’t break! Steer into the skid”. Tony’s instructors told him that it’s everyone’s natural tendency to look at the wall they’re heading for. The car goes wherever you focus, so they told him to look at the track, not the wall.

The key lesson here, “focus on where you want to go, not on what you fear,” is great, in theory … but in practice? Tony Robbins had been teaching his clients this for years so it should have been easy for him to implement. You’d think! So, Robbins is racing around the track at high speed and the instructor initiates the skid - Tony was like a deer in the headlights, he stared straight at the wall. His instructor reached out and physically turned Tony’s head to look at the track and once he’d focused on a new more effective direction, he instinctively turned the wheel and brought the car back under control.

I love this metaphor!

Often, when Stoneseed is brought into a failing project, we hear a lot of ‘how bad it is’. Our first job is to turn your head away from the quickly looming crash into the wall and get you back on track.

Deep fried BRie – A Lesson in IT Project Benefits ...