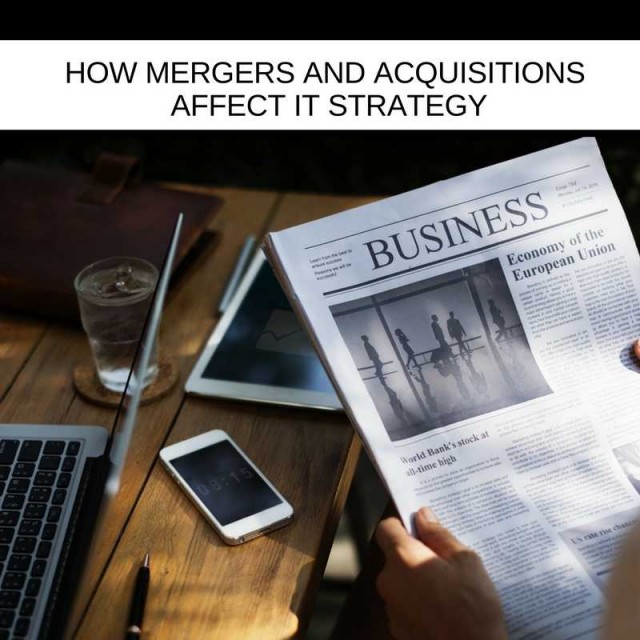 In 2016, there were 227 successful inward M&A transactions (overseas firm buys UK one) worth £187.4 billion - the highest annual number since 2011 and the highest yearly value since data was first published in 1969.

During the second quarter of 2017, the value of successful mergers and acquisitions (M&A) involving UK companies almost doubled quarter on quarter (£16.5bn Q1/17 vs £30bn Q2/17). In total there were 155 successful domestic and cross-border acquisitions and disposals in this three-month period alone.

You get the picture!

Best of all ... at the heart of every successful corporate merger is a successful integration of IT systems.

What a great opportunity for CIOs and IT Project teams to cement the role of IT as a strategic business partner!

If you've ever been on the IT side of a merger you'll know what a rollercoaster it can be. For every seamless "plug and play", hit the ground running alignment of IT systems there are a dozen spaghetti nests of legacy architecture that somehow need joining together. Then there's a handful that just won't integrate easily and some kind of new way has to be engineered without eroding the value of the merger. Oh ... and while you do all this ... you have to keep the lights on and provide support as usual. You should be given a cape!

IT no longer merely supports the business, in most cases, IT now IS the business. Core business strategies, operational functions and often the entire means of production are now so inherently underpinned by IT that I can think of no other department who can contribute as much to the success of a merger or acquisition.

I was asked last year to consult on a takeover that had gone smoothly until it came to the integration of IT systems. By the time the IT teams had been called in, the senior executives who had brokered the deal had long since taken their fountain pens off into the sunset.

The takeover itself had been carried out with military precision but comparatively, little thought had been given to the IT integration project and costs were spiralling. For this project, the horse had bolted, but one lesson everyone can take from this is that in an M&A scenario the CIO must be brought in at the very earliest opportunity.

If the CIO had been engaged sooner he could have created reliable integration cost estimates, scoped out issues that may be faced and secured the resources, skills and leadership ready for implementation, he could have accessed extra resources from the Project Management as a Service (PMaaS) sector. Instead, he told me that he felt like banging his head against a wall.

If you were tinkering with any other form of architecture, say joining two buildings together, you'd call in the architect at a very early stage to give you the value of their experience. What are CIOs and Project Managers, if not the architects and designers of IT systems? When you are joining two IT infrastructures together these resources should be deployed at the earliest possible planning meetings to avoid higher than planned implementation costs. Not consulting the architects in either scenario risks the whole thing collapsing into a pile of rubble.

This CIO told me that he was summoned before the board and asked to justify why costs had spiralled and why delivery was delayed. He told them that it was because he hadn't been called by the board sooner. The cost model was designed by the CFO, the time frame for integration was devised by the CEO and yet it was the CIO who had to explain himself.

It's like a soccer chairman appointing a director of football, then deciding which players to buy between them and blaming the manager when results don't go the club's way.

Back in his office was a team of burnt out talent who had been working hard on an upgrade to the firm's enterprise resource planning capability - they had been burning the candle at both ends integrating cross-departmental software and a new CRM system when the CIO had brought them the news that all this had to be put on hold while they tackled the IT integration.

It's more than saving money and reducing operational risk though.

Several CIOs have told me that they have actually added significant value to M&A transactions by driving IT initiatives they identified at an early planning stage. This value would have been lost had they been brought into play after the final deal was agreed. It's surely a no-brainer!

So how soon should CIOs be brought in?

I'd say IT integration planning needs to start at the same time as all other pre-merger or acquisition processes. When you're carrying out due diligence and scoping out a share grab - that's when you need to begin planning the IT side of a merger or takeover.

So as a CIO how can you maximise and leverage your significance?

Have a trusted third party who can take an independent view and advise on any capability gaps. IT teams are sometimes so busy working on the day to day that issues become invisible. You can habitualise them like you might habitualise stepping around a loose paving stone or driving around long-term roadworks to the point where they have no impact on the routine operation.

However, when you throw in a new challenge, like integrating IT following a merger, small issues can become huge problems that really suck value out of the transaction. For example, the ERP upgrade mentioned above was progressing nicely, despite the team being a member short because of maternity leave. Tasks had been shared out and although they were working at full stretch - the project was on time. When the new, more urgent integration project was announced the team visibly collapsed. They had been working all hours on a project that had now been shelved and were expected to drop everything and attack the new project with gusto and enthusiasm. Yeah right!

Regular capability gap analysis would have predicted this and recommended solutions, like buying in resources from the PMaaS market.

One of the greatest challenges with any IT integration is that on one side of the merger or take over there will be staff who are used to working in a certain way. When ABC Inc. takes over XYZ Ltd and the staff at the latter are expected to start using the CRM system favoured by the former you can't expect the XYZ team to be as proficient as their ABC counterparts on day one.

Great CIOs know this. They factor in the need for extra IT support and prepare themselves for "obvious", “dumb” questions.

Also, the staff on both sides of the merger are likely to be rather worried about their job security, you need to be on your best game as a leader to get the best out of people, stakeholders, who are feeling this way.

Then there are the members of your team. Think of the impact that dropping everything they are working on to switch to the integration could have on morale, imagine the toll that the extra support provision and the pressure of the integration timeframe may take and be ready to put your arm around them. They're human too. Know the PMaaS options available to help your team.

3 - Never Take Your Eye Off The Business As Usual

In an increasingly digitised economy, mergers and take-overs can be all-consuming for IT teams. Sometimes this can mean unknowingly switching resources that compromise keeping the lights on day to day. The problem comes when a major issue develops with your routine operation and the support that previously underpinned it is deployed elsewhere.

Again, carrying out regular analysis exercises will allow you an insight and present you with available options. When you start to imagine how a future IT landscape might look, what infrastructure requirements you may have post-merger you should also seek to ensure adequate support for your day to day running.

Often integrations fail because the IT team has little experience planning and delivering this type of project.

There are plenty of case studies to read online and, as with every capability challenge, a trusted IT advisory partner will be in a position to help, usually from a perspective of "been there, done that." The Project Management as a Service market has resources for M&A integration projects just like it does for any IT test that you face.

Many IT integrations fail simply because the IT team is not aligned with the business case for the merger or acquisition. This is surprising because CIOs and Project Teams are expert in delivering business change and facilitating commercial strategy through IT projects.

An IT integration is effectively just an IT Project so why is there often a disconnect between business case and the IT team delivering integration? The most commonly cited cause is the speed of a merger. Large corporate transactions are sensitive matters so information is shared by business executives on a need to know basis and these execs are more likely to make snap decisions during a takeover situation than at any other time. For IT teams this can often mean a lot of reading between the lines and playing catch up.

By quickly understanding the business case for the transaction and scoping out the future IT landscape that will support the merged businesses' operations, CIOs can switch the balance of power and control in their favour. You will find that IT has a lot of dependencies with other departments during this time so aligning governance, transparency and progress reporting measures with this broader structure will ensure that you are not working as a stand-alone silo and remain in touch with the latest news.

I started by suggesting that a merger or acquisition is a great opportunity for CIOs and IT Project teams to cement the role of IT as a strategic business partner, hopefully the next time you get that call from the CEO telling you to "drop everything" you will be able to see it as an opportunity and not a reason to bang your head against the nearest wall.

Tags:
Should you outsource? Leadership
IT'll Be Alright On The Night. IT Project Manageme...
A change is as good as unrest. How to engage disen...