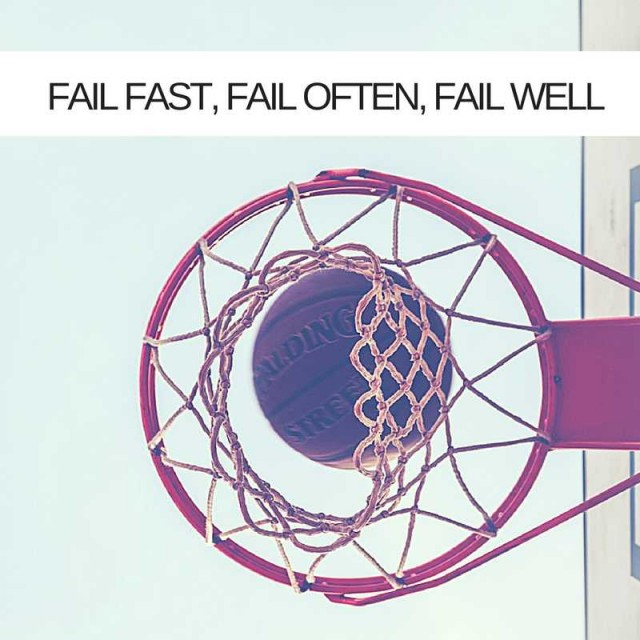 “I've missed more than 9000 shots in my career. I've lost almost 300 games. 26 times, I've been trusted to take the game winning shot and missed. I've failed over and over and over again in my life. And that is why I succeed.” – Michael Jordan.

An IT Project Manager I know, let's call him Richard, has just had the biggest run of bad luck that I've ever seen while delivering an IT Project. You know those online lists of things that can sink a project? Well, Richard's project has checked them all off one by one. It's been enough to consider throwing in the towel on an almost daily basis, there was "sign" after "sign" that luck wasn't with him. Many other PM's I know would have given up, many other CIOs would have pronounced the project dead and a drain on resources - it did look holed under the water line! The problem was that this project added key strategic value, the business case was indisputable and future projects were entirely dependent upon it.

By the way, that quote from Michael Jordan is from a poster in Richard's office.

This week, Richard delivered his project just a week and a half late and only a fraction over budget.

Richard, the unlucky Project Manager, doesn't even see himself as unlucky! He relishes the challenge that failure brings and the opportunity to learn and try something new.

The truth is that most successful people have more failures than average because they do more. They ideate more, they try more, they challenge themselves more. When it goes wrong, they pick themselves up, and dust themselves down, they learn the lessons that failure has taught and shake off negativity quickly. Contrast this with others who dwell on the mistake too long, or commit to make the failure the last thing that they do in the project and it's easy to see how response to failing is the difference between victory and defeat.

I've always maintained that once a goal is clear you cannot let 'failure' and distractions get in the way. You cannot be swayed by criticism or what people "want to hear" – you have to stick to your guns - never stop at a failure, keep going until you get all the failures out of your system until the only possible outcome is success.

Smart man Edison! There could be a lot in his mindset for Project Managers. Moving quickly to prove that an idea is not going to work, allowing you to side-line it and shift focus elsewhere can only speed up success, right? So ... how to apply it?

Here are Four ideas on how to Fail Fast, Fail Often, Fail Well.

Working hard in your project, it can be hard to spot when things go off course, take a view on what's going wrong and what to do to correct it.

Often, a trusted IT Project Management partner can walk into your project and instantly spot things that you have become blind to and advise timely corrections.

One of my PM friends compares this with the home improvements that he made when he sold his last house. He'd lived there for seven years and there were a few jobs around the place that he'd been ‘getting around to’. One, in particular, was that he had installed the wires for a shaving light above the mirror in the ensuite bathroom, but never bought the light! Over time, he had become blind to the wires hanging out of the tiled wall with their ends sealed with coloured insulation tape. Every potential buyer saw them though and couldn't see past the protruding wires to take in what was an otherwise show-home quality bathroom.

2 - Get Good At Quick Action Evaluation

When an IT Project takes a wrong turn and you take corrective actions - how good are you at measuring the effectiveness of those actions?

A PM friend, Martina, implements a great 'measurement cycle'. Firstly, she believes that 80% of solving a problem is becoming aware of it and having the willingness to tackle it! At this stage, she says, the hard part is over so she treats her team to cakes or something like that as they gather to work out the solution.

At this meeting, the team is encouraged to believe that they are free to ideate, they are not trapped by preconceived ideas or 'what's worked in the past'. At this stage, the mission is to increase potential with extremely positive, empowering language and thinking. This freedom allows some really creative solutions to be suggested, like seeking ideas from the Project Management as a Service sector. Martina considers this stage to be about 15% of the overall process and it is here where the real genius lies.

The corrective action and measurement of the success of that action are only 5% of the total process effort, 1% for the action and 4% for analysis of the result of the action!

Firstly, this allows the team to move bravely forward and implement the action - and be totally honest about how well it has worked.

Secondly, and this where the "cycle" part comes in, the team is encouraged to evaluate quickly and if necessary get back to the start of the process again where awareness and willingness kick-start any necessary further actions.

You'll have heard of, and probably, done a post-mortem where you look back at a project after it has failed to find out why.

What if you could predict in advance why a project is likely to fail? (Google) X's Astro Teller often talks about pre-mortems. At X, teams vote to kill their ideas in advance - pre-mortem. The thinking being that the ideas that survive this process (those ideas you literally can’t kill) are the ones worth pursuing.

I have seen this work really well in IT Project Management where the Project Team have emailed stakeholders and end users, explained what the goals of a project are, how it will work, what it will deliver and then asked ... "A year from now, this project has failed - why?".

The feedback the team got from this was invaluable. Once they had identified and filtered out the change-resistant negative gripes, they were left with some really useful insight that undoubtedly allowed them to "see around a few corners".

4 - Get Good At Flagging Up Issues

When a culture evolves where everyone has the right AND the responsibility to flag potential issues it's amazing how much more quickly they are dealt with, accelerating success.

The textbook example of this is Toyota's 'Stop the Line' manufacturing technique, in which every assembly line employee has a responsibility to push the big red button that stops everything when they notice something that they are not happy with. When this happens supervisors rush to the source of the issue and the first thing they do is thank the employee who pushed the button. By fixing problems as they happen what you maximise your response options and improve your process.

Too many IT Projects still have a culture where you press on and anything less than full steam ahead is not acceptable. Sometimes, most times, you get there quicker by occasionally stopping to check that you're on the right route! Taking a helicopter view once in a while and encouraging all team members to holler if they feel that something isn't right has saved many projects from costly problems.

That's just four thoughts on how to, as the title says, "Fail Fast, Fail Often, Fail Well". As the second half of the title says, "The Key To IT Project Success" is in how well you fail so I would love to hear any thoughts or any tricks that you have and, as always, if YOU need that independent second pair eyes, please get in touch.

Tags:
Developing the qualities of a great PM
PMaaS – The Golden Gate for IT Project Instant Gra...
The Roast of a Project Manager