Could disruption be your greatest IT Project opportunity? - Stoneseed

Could disruption be your greatest IT Project opportunity? 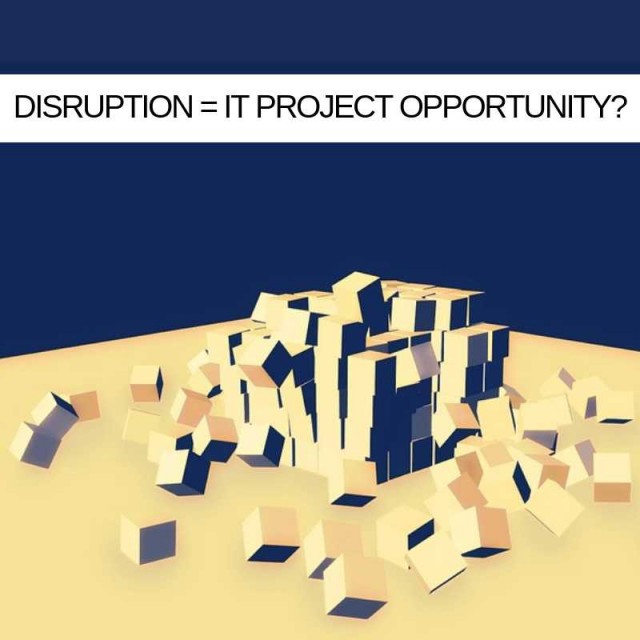 I recently re-read the 2018 Project Management Institute (PMI) Pulse of the Profession report.

I do this every year, reading and re-reading it, over and over, and each time it seems that I take something different away! One thing in particular, however, keeps jumping out and grabbing my attention from the 2018 report.

"Insight 3: Organizations will rely on their project professionals to take advantage of disruption—not just react to it."

I think the main reason that this stood out is that, over the last year, I have had many conversations with colleagues and clients about how the Project Management as a Service (PMaaS) sector seems to have subconsciously geared itself up to do just this - to leverage benefits from disruption.

Whatever the maturity of your Project Management operation, to get the greatest results, it is worth measuring how well it is performing pro-actively in these disruptive times.

Ultimately, there are three ways that organisations seem to deal with disruption...

1 - They try to ride it out and hope that they still have market share (walk down any high street to see how well that's working out).

… or the most innovative flip that second option on its head …

3 - They vow to not join 'em, just to beat 'em. They approach disruption as an opportunity to evolve (and they let their IT Project teams lead).

Disruption IS An Opportunity

A good example of this would be Uber's disruption of the taxi industry. Our local taxi firm didn't have an app before Uber arrived. In the days before Uber you had to call up your local cab operator, often getting an engaged tone during busy times. You'd have to explain your location to the person on the other end of the phone and if you were in a strange town this could be tricky - I recall a colleague visiting Cardiff telling a taxi firm that he was "next to a statue of a man I don't recognise." Post Uber some taxi firm's apps will even use your phone's GPS position to locate you.

Also, because the Uber software allowed drivers to better optimise their time, capacity utilisation became an issue for existing taxi firms in order to remain competitive. Time spent in the cab with a passenger increased with Uber because the platform allowed for better matching of drivers and passengers. Initially, traditional taxi drivers experienced the opposite, the time that they had a passenger in their cab declined - until the best firms reacted with optimisation initiatives of their own.

The most innovative CIOs I know are building organisational cultures that consider disruption as an opportunity to grow and develop rather than a massive risk or a threat. As a result, they are expanding their influence within their parent companies. Many are finding that to do this effectively, they have to look beyond their current capability and resources. They are turning to the Project Management as a Services market and discovering that the sector is remarkably ready for most challenges that their teams face from disruption.

Why Is PMaaS A Disruption Rock Star?

I think this is perhaps because PMaaS exists on the cutting edge as far as evolving tech, tools and thinking - so it kind of stands to reason that when you live at the sharp end of the good stuff you also probably encounter the less than good stuff first too. So you learn to deal with it and turn it to your advantage earlier than the rest of the industry too.

Another reason may be the opportunistic character of those who inhabit the Project Management as a Service universe. When you work for XYZ Corporation it is understandable that you just focus on delivering the goals of XYZ Corporation. When disruptive forces impact those goals, for instance, an innovation from a competitor threatens to steal market share, it is easy to react in the interests of XYZ Corporation – I.e., react and respond to the specific disruption and XYZ's unique challenges. In the world of PMaaS though, the mindset is different - the disruption may be XYZ's but PMaaS talent instinctively recognises the value of the response to other organisations. Over time, a catalogue of responses grows exponentially to create a library of value-driven response to disruption.

So in the case of the taxi apps, an IT project team working for XYZ Cabs might respond by delivering an app to compete with Uber. Job done! A PMaaS mindset would also address XYZ's need but see that the tools that they had created could have wider revenue opportunities, like selling the software to taxi firms across the world, for example. It wouldn't stop at taxis though, so when the ambulance service is looking for systems that pinpoint callers by their GPS position, by entering the PMaaS market they could find that a lot of the work they need to do already exists - in the shape of an app designed to get you home from a night out in town!

Leading incumbents in every industry face the constant risk of being displaced by entrants to their field using new technologies, new business models, or an innovative approach to capture market share. It is increasingly important to recognise in advance the potential for disruption and have a strategy ready to take full commercial advantage of it. As I say our local cab firm didn't have an app until Uber arrived in the city, by which time the market share horse had started to bolt. In London, on the other hand, I remember using a taxi app a good year before Uber arrived in the city. It was clearly a pre-emptive response to Uber's growth in the United States and it meant that this one firm was ready to compete - if only they'd spotted the wider potential and sold their app globally!

To effectively manage the change, the PMI suggests that organisations focus on the following: -

As project leaders become EVEN MORE pivotal, increasing their training and skills is vital. The most innovative organisations have seen the value of developing competencies geared towards leveraging disruption for commercial gain by investing in formal training.

MAKE IT PART OF YOUR CULTURE - EMBRACE FLEXIBILITY!

When your organisational culture is set up to view disruptive technologies as an opportunity to grow, best practices seem to evolve naturally. According to the PMI, eight out of ten innovator organisations encourage their project leaders to leverage flexible working practices that allow them to focus on higher-gain work like strategic thinking and planning. The most innovative organisations not only value the technological shift toward a digital environment, they embrace it!

SEEK OUT NEW TOOLS AND APPROACHES

Digital transformation has always needed an organisation to take full advantage of new and evolving technology, tools and practices. Organisations that support their project leaders when they consider a new approach, methodology or process to be right are the ones experiencing the greatest wins. In Project Management one size has never really fitted all! One of my Project Manager friends is applying "design thinking" picked up largely from online collateral from Stanford University's 'd.school' - she has the full support of her leaders and is enjoying some innovative results. PMI predicts the use of new practices, like design thinking, will grow to the same levels as leading current practices, such as Scrum, Waterfall, Agile etc - that's worth thinking about and acting upon - trust your talent!

The thing is, disruption is inevitable. Each of these 3 internal improvement thought starters put forward by the PMI will nurture the innovative leveraging of opportunities that may otherwise be missed when faced with disruptive technologies. Like any new adventure, it's OK to accept that you're lost, pull over to the side and ask for directions. As previously mentioned, the PMaaS universe has been quietly gearing itself up for this moment. It is ready for YOUR challenge.

Remember, I said there are three ways that organisations seem to deal with disruption...

1 - They try to ride it out and hope that they still have market share.

3 - They vow to not join 'em, just to beat 'em. They approach disruption as an opportunity to evolve and they let their IT Project teams lead.

Guess which are leveraging the best outcomes from disruption …