Conflict - your greatest IT project opportunity? 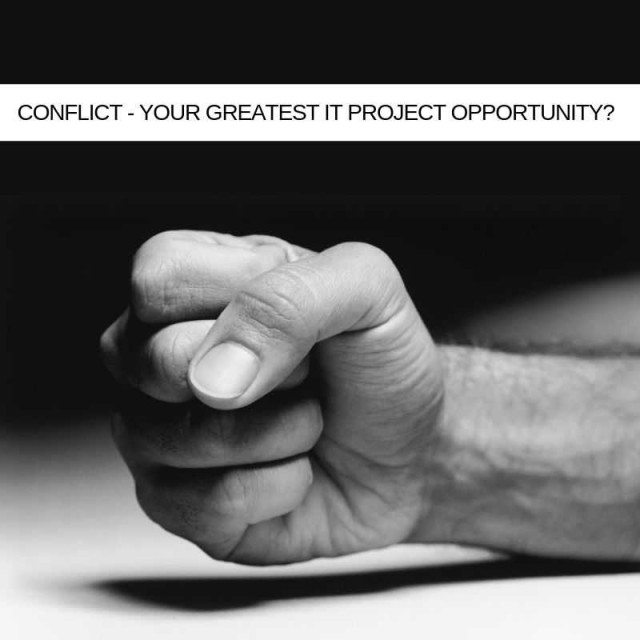 It's great when an IT Project progresses from implementation to delivery without a hitch, an event free ride from start to finish with no bumps in the road. Or is it?

How does the word “Conflict” make YOU feel?

I asked a few colleagues and their responses ranged from anxiety to aggression, from some there was shortness of breath and from others a 'bring it on' deep inhalation.

On the contrary, I LOVE it! Here's why.

My friend Gav told me about an IT Project he'd been working on that had been plain sailing throughout, there was a great spirit among the team and the project had delivered on time. Sadly, it was over budget.

In the debrief, a team member had said something that was really interesting about a key part of the project had been taking up a lot of the team's time. They were scratch building an exciting app that would disrupt the market and deliver real business value, but they had been chasing bugs that had really pushed up costs.

Gav asked his team what they could have done better, and one guy mentioned that he'd found the solution they were scratch building as an off the shelf product but hadn't mentioned anything at the time. Why? He didn't want to upset his colleagues who were very proud of the work that they were pouring their hearts and souls into.

He's right, it would have caused conflict, but the outcome of the conflict is that it could have brought the project home under budget.

I love conflicts because they flag up challenges like nothing else and usually lead to much better outcomes. They are also just GREAT for clearing the air and establishing your reputation as an in control, all-rounder.

All too often conflicts lead to predictable responses, like fight or flight or sweeping issues under the carpet. Here are SEVEN ways to ensure that conflicts really ARE your greatest project opportunity.

Rockefeller, one the planet’s most successful businessmen used to say, "Success comes from keeping the eyes open and the mouth closed."

It's the same with conflicts in IT Projects. When you TRULY listen to what your team is telling you, you deep dive into the challenges that are holding your project back.

Many IT Project conflict occurs because a colleague’s feelings are not being acknowledged. When you take the time to acknowledge your team member’s problem, you can often prevent any further conflict. A team member on a project last year came to me with his feeling that things weren’t going right, that we wouldn’t be able to deliver. As it turned out the project was on track, it delivered on time, the issue had been a lack of confidence and by listening, really listening, I was able to coach this individual and show how the team had his back.

Sometimes just feeling that you've been heard is enough. So, try not to cut a team member short if they’re expressing their feelings. Slow down, listen, take as much time as THEY need to feel heard!

3 - Solve the issue not the symptom

Often, conflicts are not what they appear. Take Gav's project I mentioned earlier, it would have been tempting to treat the symptom of a bust budget by reducing overheads, cutting everyone's salaries, losing a team member, inflating future budgets, etc, but none of this would treat the underlying cultural issue. A team member didn't feel he could flag up the fact that they were working hard on something that was available to buy off the shelf!

As the project manager, are you not busy enough?! Whilst not entirely abdicating responsibility, you should seek to delegate conflict resolution where appropriate. You cannot 'down tools' to personally referee every conflict in your IT Project. When you delegate conflict resolution to a trusted team member, you give them a chance to grow and free yourself for more pressing matters. Make sure that they keep you in the loop though, you are still responsible!

Always go for Win/Win! When all parties leave happy, perhaps losing a little, but with a satisfactory outcome that chimes with the business goals of your IT Project, teams almost always emerge stronger. Compromise is not weakness and the best project leaders know where they have scope to shift for the greater good. There are times when you can’t budge, but when teams see you compromise when you can - they are more accepting of when you cannot.

Often conflict forces a third way to be found! Usually, new solutions appear that would not have crossed your mind, had it not been for the occurrence of your conflict. Don't come at conflict with an adversarial, entrenched point of view and you could come away with a much better IT Project outcome. Conflict is a cue for EVERYONE to open their mind!

Many Project Management as a Service providers can help when conflicts are not 'solving themselves'. Often, conflicts are the result of deeper issues and it helps to have them looked at by a fresh pair of independent eyes. With the best intentions, teams often approach conflict with their own baggage and see things in a way that may not be conducive to a resolution that is in harmony with the project's business goals.

Conflict within an IT Project, in one shape or another, is almost inevitable. When you implement effective conflict management practices and acknowledge the potential that conflict can unleash, you can turn disagreements into positive resolutions and your challenges into real opportunities.