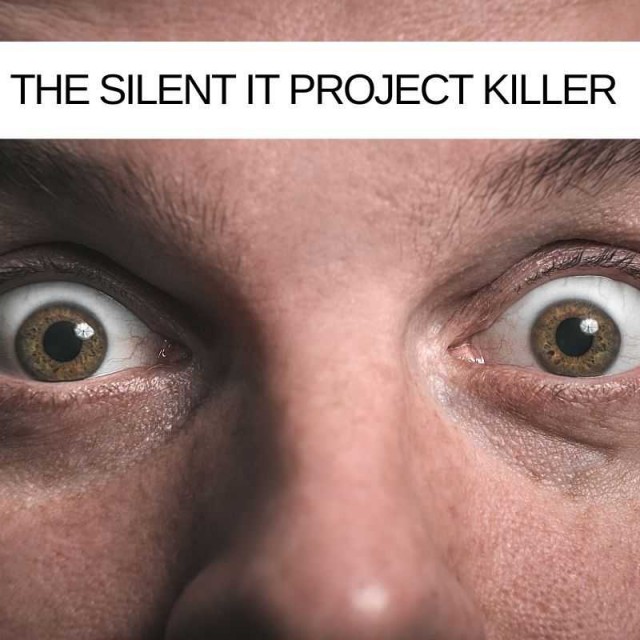 Have you ever worked on an IT Project, utterly convinced that everything that you are doing will bring success, only to have the project fail to deliver?

I mean, we’ve all been there at some point in our careers. In many ways it’s a stupid question because, well, why would you do things that you weren’t certain would bring success? In other ways it is a brilliant question, projects do fail, and I’ve never met an IT Project Manager, team member, CIO or stakeholder who set out deliberately to destroy their own project.

When IT Projects fail, it is really useful to carry out a post-mortem and establish what went wrong. Often these debriefs reveal evidence that was there all along, but not acted upon, that could have saved the project. Sometimes these signs are missed (we’re all busy) but sometimes they are ignored, either consciously or subconsciously because the new evidence doesn’t fit our world view.

This is cognitive dissonance.

In psychology, cognitive dissonance is the discomfort you feel mentally, the actual psychological stress experienced, when you hold two or more contradictory beliefs, values or ideas. It happens when new evidence contradicts your beliefs, ideals, and values and you look for a way to resolve this contradiction and to reduce your discomfort.

It happened recently to a friend’s IT project. He had been working on an app to rival a competitor’s, but they were struggling from the start! The rival app had disrupted the market and left everyone else playing catch up and looking back, he told me, this was probably their best hope – to catch up, maybe make some marginal gains over the challenger. The project they were working on would deliver, they hoped, at least an equal product and service offer to stop their customer’s deserting to the rival who was quickly gaining market share. The project was sapping resources across the portfolio but without it, the business would suffer further losses.

In the meantime, something happened. The company my friend works for bought the other firm, the challenger, and although it was all subject to regulatory clearance, a wholesale merger was inevitable.

Now, reading this in the cold light of day, what’s the obvious course of action given this new situation? The project you’re working on is burning up resources to deliver something, at best, marginally better than something else that, by acquisition, your firm now owns … it’s not hard, is it?

Sadly, no-one made this call. The brief had been to create a product to rival or improve upon the rival app and that’s what they continued to do. They threw hours, money and resources at it, even complementing their in-house talent with drafted in external resources.

It was months before a management reshuffle saw C-suite talent from the acquired company migrate to the board of the new larger firm and the first thing they noticed was this rather pointless exercise! The project was promptly killed, and the challenger firm’s app was adopted across the whole business.

It's interesting that no-one acted upon the new reality when the merger was announced, nobody even asked the question “are we wasting our time?”. It’s even more interesting that, even now, my friend and his team believe that they should have been allowed to continue with their work. Sound familiar?

We shouldn’t beat ourselves up about it, it is human nature. To illustrate this, let me share an extreme example.

I remember reading about a cult in the USA in the 1950s. A housewife, who claimed to be a psychic and in touch with a god-like being from another planet, predicted that the world would end on 21st December 1954. She warned her friends of the impending disaster and told them that true believers would be rescued, at midnight, by a spaceship.

I mean, where do you even start with this? Imagine a friend of yours sharing this ‘knowledge’ with you. You’d ask, “Is everything alright at home, hun?”

Some of this woman’s friends left their jobs and their families and moved in with her to wait for salvation.

Leon Festinger, a renowned sociologist of the day, infiltrated the cult interested to see what was driving their behaviour but, more importantly, see what they did when the time of apocalypse passed, and no spaceship arrived.

Logic suggests that the cult followers would declare their leader a fraud, that they’d get their coats and leave, return to their regular lives.

Instead, as midnight came and passed, they became even more emboldened in their beliefs. Rather than declare this an unmitigated failure they altered the evidence before their eyes to fit with their world view - the god-like beings had clearly been so impressed with their faith that they had spared the planet. The cult was convinced they had saved the world and went on a recruitment drive with this message.

In his books “When Prophecy Fails” and “A Theory of Cognitive Dissonance”, Festinger concluded that this behaviour isn’t confined to cults – it affects all of us. When confronted with evidence that challenges our deeply entrenched beliefs, we tend to reframe the evidence rather than change our beliefs. We create new justifications, explanations and reasons to counter the evidence.

Festinger coined the phrase “cognitive dissonance”. We like to think that we are making smart and rational decisions and judgements. Often, we’re not!

This doesn’t make us bad people. Leon Festinger suggests that we human beings strive for internal psychological consistency to be able to function mentally in our real world, internal inconsistency causes psychological discomfort and we are programmed to find the quickest way to reduce the cognitive dissonance. Against this backdrop you can understand why cult members blindly follow their leader, politicians defend bad policy decisions, voters vote for the same party their whole lives, sports fans stick with their team through thick and thin and why sometimes we follow a failing IT Project over the precipice.

The question is, in IT Projects, how do you counter it?

Creating an awareness of the existence of cognitive dissonance will, hopefully, lead you to ask the right questions! Ask yourself searching questions about all your Project management judgements and you should create a safety net, sometimes all you need is some thinking space.

Ultimately, cognitive dissonance is about the baggage that you carry – your beliefs can impair your judgement when faced with new evidence. Therefore, it can be helpful to get someone with no baggage to look at your project.

Often, an external pair of eyes can see things that you have become blind to, point out evidence that you’ve missed and opportunities that are available. An independent project management partner, who gets to really know your business and your culture, is worth its weight in gold. Choose one that is uncompromisingly independent and objective, steadfastly client-side and agnostic of all technology vendors.

At Stoneseed, our values are clear and straightforward; we stand for an egalitarian culture and a general sense of fair play. Stoneseed is solely accountable to you, our client, for instance, with my friend’s IT Project, we’d have had no hesitation in recommending this project should be killed in the face of the merger, unlike the resource provider who happily offered project management services and talent for a failing project. It’s common sense! We’d rather be honest and lose business than win business and be associated with bad IT Projects.

So, this week, open your mind to the idea that you may not be as smart as you think you are. Take a second glance at all your IT Project Management decisions and, maybe, have that independent pair of eyes take a look at your portfolio.

In the meantime, I’ll head up to the roof to see if that spaceship arrived yet?!

Tags:
Developing the qualities of a great PM Leadership
The new onboarding? Is pre-boarding the secret to ...
Rain, rain go away. An IT Project Management lesso...