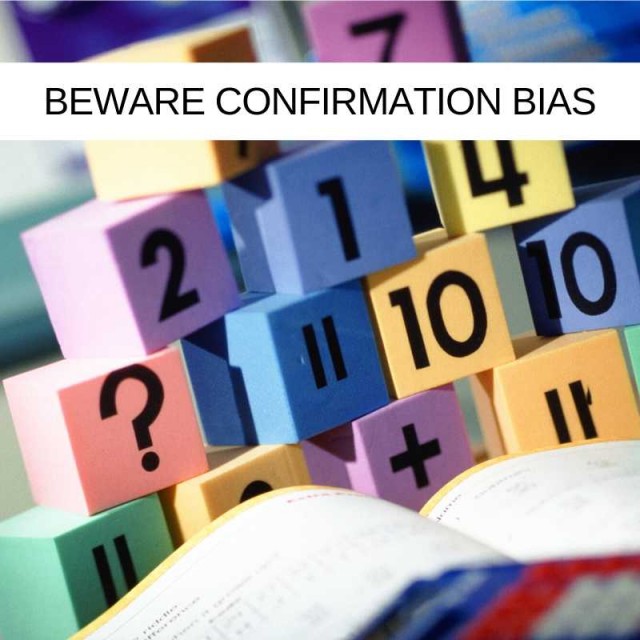 Have you made any New Year Resolutions? I’ve been chatting with IT Project Management colleagues, friends, clients and acquaintances over Christmas and it seems that collectively, and yet, independently, we have identified areas for improvement.

The first was all about managing with meaning and purpose, this second one is about confirmation bias – how and why to avoid it.

Writing for Psychology Today, Shahram Heshmat, an associate professor emeritus at the University of Illinois at Springfield with a PhD in Managerial Economics, puts it neatly, “Confirmation bias occurs from the direct influence of desire on beliefs. When people would like a certain idea or concept to be true, they end up believing it to be true. They are motivated by wishful thinking. This error leads the individual to stop gathering information when the evidence gathered so far confirms the views or prejudices one would like to be true.”

In a nutshell, it works like this. Once you have formed a view on something, you give greater weight to information that confirms it to be so and dismiss or even ignore information that points to the view being wrong.

I often see confirmation bias in post-mortems on failed IT Projects.

“We’ve always done it this way,” a project manager once told me when I asked him if Agile might have been a better approach to Waterfall.

“Project Management as a Service would have added costs,” a CIO said as we looked back on a project that had failed, costing thousands of pounds (the PMaaS resources would have added no net costs to the portfolio and would have saved the project from failure).

“The Project Leader has more experience, we all chip in but, ultimately, his decision is final,” a project team member told a colleague, defending why he hadn’t shouted louder to alert his team to a problem he’d spotted. An issue that he had respectfully flagged up, but which was dismissed – it eventually caused the project to fail.

As Shahram Heshmat puts it, “Confirmation bias suggests that we don’t perceive circumstances objectively. We pick out those bits of data that make us feel good because they confirm our prejudices. Thus, we may become prisoners of our assumptions.”

The concept of confirmation bias was first coined in 1960, by Peter Wason. If you haven’t seen his experiment before it can be a fun illustration of what I’m talking about here.

They fit a rule. You have to guess the rule.

You can suggest your own triples and you get feedback on whether your sequence also fits the rule. Finally, after collecting enough evidence, you guess what the rule is.

I tried this over Christmas but with my own sequence of 2-4-8 and most folks suggested sequences like 10-12-14, 18-20-22 and, after being told that these sequences fitted the rule, guessed that the rule was the two times table. They were told that this wasn’t the rule.

Others put forward sequences like 4-8-16, 3-6-12 and, on being told these fitted, guessed my rule was ascending numbers that doubled. It wasn’t.

Some then proposed other sets of triples from the two times table and again, were told that these still fitted the rule, one even became quite vexed that I was “messing with her head”.

Another proffered 10-20-40, 80-82-84 which fitted the rule and then suggested the rule might be ascending even numbers. Nope!

Finally, one asked if 1-2-3 fitted, was told it did and guessed correctly that, in fact, the rule of the sequence was simply any ascending numbers.

I was interested that none of my friends asked if 10-9-8 fitted, or 3-2-1. They’d have go a straight “no” but neither of these fitted the pattern they had already decided was right in their own minds.

In this experiment and in so many other aspects of life, including IT Project Management, a solid “no” is a much better indicator of the actual truth than a “yes”. Quickly ruling out what doesn’t work can get you to your intended outcome faster than testing a bunch of theories that you believe fit – false positives can be fatal to a project.

How often do we look at a failed IT Project, and with the benefit of hindsight, the cause is obvious? Whether you are conducting an inquiry into why a project failed or making decisions while it’s still live, the same data is available. T H E   S A M E   D A T A!!!  So, how come we can’t see what’s so obvious? It’s the same as when we see 2-4-6 and our mind locks onto the two times tables - it’s hard to shift. This is fine in Wason’s harmless experiment, but an IT Project initiated to deliver great business change deserves better attention.

THERE’S A TWIST IN THE WASON STORY!!!

Although my unscientific Christmas experiment proved Wason’s hypothesis, and evidence from project management post-mortems suggest that confirmation bias exists, Wason’s original experiment may not have been as conclusive as he claimed.

Like my friends at Christmas, we are led to believe that the participants in Wason’s experiment also ‘tested’ triples that fitted their own theory of what the rule was. Participants, we are told, didn’t try sequences that might falsify their theory (like 8-3-7) and so were simply trying to confirm their beliefs.

Again, writing for Psychology Today, Gary Klein claims, “The original Wason data reveals a different story. Wason’s data on the number triples (e.g., 2-4-6) showed that six of the 29 participants correctly guessed the rule on the very first trial, and several of these six did use probes that falsified a belief.”

“The takeaway should have been that most people do test their beliefs. However, Wason chose to headline the bad news.”

It’s ironic isn’t it that the man trying to prove the existence of confirmation bias, that we often ‘adjust’ data to back up our theory, seems to have fallen victim to it himself.

Run the experiment on your colleagues and let me know how they get on!

In 2020, the most powerful gift we can give to our colleagues, stakeholders and end-users is that we really approach Project Management with an open mind.

Take a look back at those project management biases I mentioned at the start: doing things the way they’ve always been done was right for those things but not necessarily what you’re working on now; PMaaS probably won’t add net costs to your portfolio (and certainly costs less than a project fatality); and, guess what, the boss doesn’t have all the answers!! Who knew?!

It can be uncomfortable to challenge our preconceived notions and beliefs – but the better outcomes you’ll enjoy, make it so worth it.

Tags:
Developing the qualities of a great PM
Stoneseed has been named as a key vendor for PMaaS...
Project Manage with meaning and purpose. New Year,...