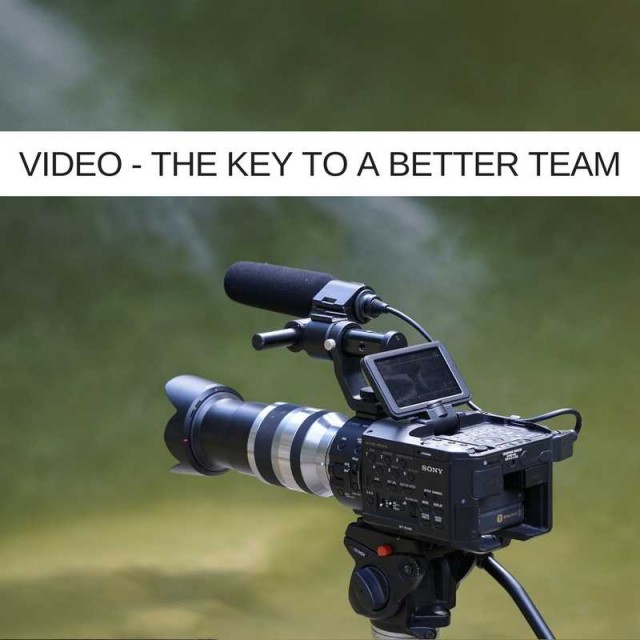 I just witnessed an IT Project team undergo a massive positive transformation ... all thanks to a video camera and an innovative CIO.

The team was going through one of phases.

You ever have these? Nothing was wrong ... but nothing felt right. They were delivering IT Projects on time but not feeling proud of their achievement. There no high fives or punching of the air in triumph.

No-one could put their finger on the problem.

As the CIO put it, "Decisions felt like wading through mud in wellington boots", success felt more "by luck than by strategy" and it didn't feel like the team was "firing on all cylinders".

This happens occasionally, doesn't it? We are often asked to provide independent analysis of Project Management teams and their procedures, usually, an independent pair of eyes can spot things that have become invisible to you. Plus, you spend all day busy working in your projects, you may not be aware of new innovations from the expanding Project Management as a Service universe. A partner who is up to speed with latest developments, services and solutions from this sector can recommend approaches that you may not even know exist.

We took such a call from this CIO but he had also had an idea that I think is both brilliant and, at first glance, a little "out there".

The next time the team assembled to make a strategic decision, he set up a video camera on a tripod in the corner of the room and he filmed the meeting.

Then, afterwards, he played the meeting back to the team and asked each of the film's stars to take notes and share observations.

The results were fascinating.

Not on time at least.

However, as they had walked in holding a freshly made cup of coffee, others felt, the latecomers had made a choice that had made them tardy, i.e., "it's 2 o'clock, the meeting’s starting let's grab a coffee to take in". It was also pointed out that they were serial offenders and that the meetings always started late as a result. Other team members felt that they were being penalised for their own punctuality.

The solution was to agree that meetings would always start on time ... not a second late. Walking into a meeting that is in full flow is embarrassing. The falling quiet of a room, the awkwardness as you find a chair, the tangible annoyance of things being recapped for your benefit ... after you've done that a couple of times you start to rethink your behaviour!

As the 'chair' of the meeting, the CIO realised that he talked for a disproportionate amount of time. He genuinely wanted input from his seasoned, experienced team but was self-aware enough to realise he was hogging the proceedings. He held court for about half the allotted time and his courtiers pointed out that they often left meetings not feeling like they had not had their say. They didn't feel engaged or even believe in the decision that had been made.

The solution the CIO came up with was to hand 'chair' responsibility to the project's leader. The CIO then became one of the seasoned, experienced advisors whose input was invaluable to the strategic decision to be made ... just like the others! Everyone had a fair chance to get their view over.

Watching the video back, it wasn't clear what the objective of the meeting was. There was an agenda and the invitation sent to attendees’ inboxes had a subject line that told you the issue to be discussed ... but not the clear objective. As a result, the meeting meandered to a 'conclusion' rather than reaching one with focussed intention.

The solution came as a by-product of handing the reins of the meeting to the Project Leader. The CIO was busy, he didn't always have time to really drill down on the specific issues to create clear objectives for the meeting. In this instance, the Project Leader could have produced a more focussed agenda than the CIO - largely because he was living and breathing the issue under discussion on a daily basis. Having clarity on what you're trying to achieve helps you accomplish it.

After the initial awkwardness that anyone seeing themselves on a TV screen or hearing their recorded voice feels, the team had a laugh with this. One by one they recognised traits in themselves and, in a good-humoured way, in others.

One realised that she was always the 'voice of doom', the devil's advocate who pointed out what could go wrong ... useful insight ... but it meant that this was all she felt she ever did when given a chance to speak.

Another recognised that the pitch, tone and volume of his voice increased as he became more passionate about his point (to the extent that even he couldn't take himself seriously).

There were gestures and facial expressions (one team member's thinking face had been interpreted as anger by his colleagues), body posture, folded arms, eye contact ... all in all lots to take in.

The point was that as the team discussed all of these things it became apparent that they weren't exclusive to this one meeting. Each took away their own personal improvement to make ... my favourite being "I'm going to try to smile when I'm thinking or at least not look as though I'm a bulldog chewing a wasp"

The meeting overran by just short of ten minutes, even taking into account the late start and the unclear objectives, a meeting shouldn't vacuum up time from other parts of an attendee's diary. Especially when (and here comes the "But Worse" bit from the header) the last item discussed was when to reconvene ... to finish the meeting. I already alluded to how they had meandered to a 'conclusion' - that conclusion was that they couldn't reach a conclusion!

The self-aware CIO admitted that what usually happens in these instances is that he goes away and makes the decision, reconvenes the team and effectively gets them to agree. So ... what's the point of even having the meeting?

The solution? As well as agreeing to start on time, focussed objectives and agendas and a different chair for meetings, the team is also experimenting with two innovations which seem to be working.

Firstly, shorter meetings. Parkinson's law, that "work expands to fill the time available" is true of meetings. Here allotted meeting times have been cut in half with no negative impact on decision making, in fact, there are signs that it is having a positive effect.

Secondly, stand up meetings. It appears that being on your feet during a meeting creates a sense of urgency and efficiency. There's scientific support for this too, Stanford Business School professor Bob Sutton led a team that compared decisions made by stand-up meetings versus seated meetings. Decisions were taken 34% faster when standing with no difference in quality.

So there you go.

If you're going through a phase where either nothing feels right or (worse still) nothing IS right. Set up a video camera and watch yourselves back.

And if that still fees a little bit "out there", get an independent pair of eyes to take a look and what you do, how you do it and how you could do it better.