Would Santa be a great Project Manager? 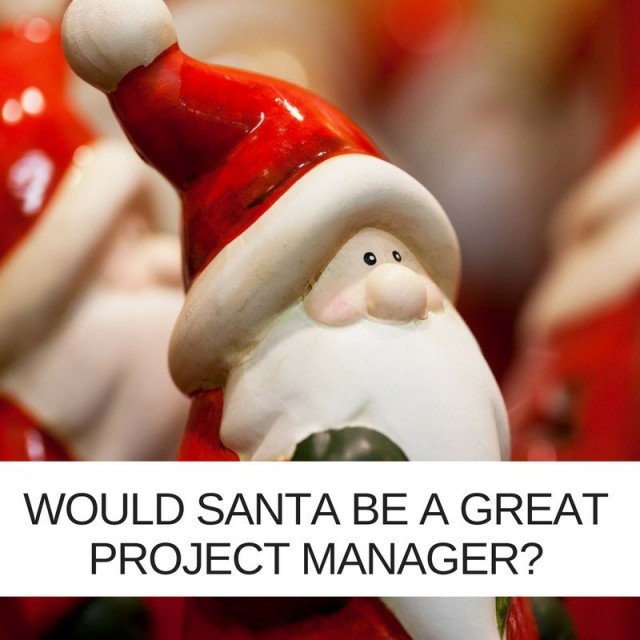 Santa delivers his project on time every year, despite its scope increasing year after year due to increased numbers of children - naughty or nice. Sure, the big man has a year to prepare to make sure he nails it and the methodology is tried and tested to the extreme but still - great job!

Could Santa do any better?

For fun let's take an independent look at his operation, praise the positives and advise where he could do even better. A Project Management Office Assessment can help refocus, refine or redesign your project management capabilities so let's see what we can do for Santa.

Santa's elves are said to make all the toys in Santa's workshop but would outsourcing this be better? When Santa first tacked up the reindeer back in the day and flew around the world in-house was probably best but the world has moved on.

IT Projects can find themselves similarly trapped in a "we've always done it this way" mindset. Are you aware of all the best in class solutions that are available that would fit with your project goals?

Lack of Delegation At The Key Moment?

While Santa's elves help with all the project preparation work he seems to have delegation issues when it comes to the big night and project delivery. Delivering presents to over a billion children in a single night means travelling at about 10 million kilometres an hour, more than 200,000 times faster than Usain Bolt! That's a lot for one chap!

One thing that Santa is on top of is data. Millions of children in the world and Santa has an up to date list of who is being naughty or nice, where they all live and what they all want for Christmas. That's one impressive CRM system!

IT Projects churn out loads of data and the best Project Managers know that it is like the beating heart of their project.

When project leaders are enthusiastic and cheerful they create an attitude within their team that can achieve almost anything. Imagine how motivated you'd be if Santa Claus were your leader! The man is literally never without a smile on his face!

I do wonder though whether Santa could share more of the rewards with his team. How many millions of mince pies and glasses of sherry do you suppose are left out for Santa? The best Project Managers know how to share rewards to motivate the team. The reindeer get their carrots - I bet the elves would love a mince pie or two!

Nothing succeeds like attention to detail. IT Project governance can be the difference between success and failure. The Project Management as a Service market can provide great governance, robust and consistent processes and metrics and reporting structures giving you peace of mind and control.

He Always Has a Workaround Plan

How does Santa get into living rooms? Down the chimney, right? Imagine having this plan in place with delivery schedules that are as tight as Santa's are only to find that many houses don't have chimneys! What would you do faced with a gas fire?

IT Projects are often faced with problems and challenges and the best PMs have a workaround plan ready or a can-do attitude that finds a way through.

So, on the whole, Santa has it nailed! He'd make a great Project Manager!

Consider putting a Project Management Office Assessment on your Christmas wish list this year to see how you measure up against best practice.

In the meantime, have a great Christmas and a successful New Year!

Find out more about Project Management as a Service from Stoneseed
IT skills shortage solved aas if by magic
Merry Christmas and Happy Holidays!