The biggest challenges for all CIOs in 2017 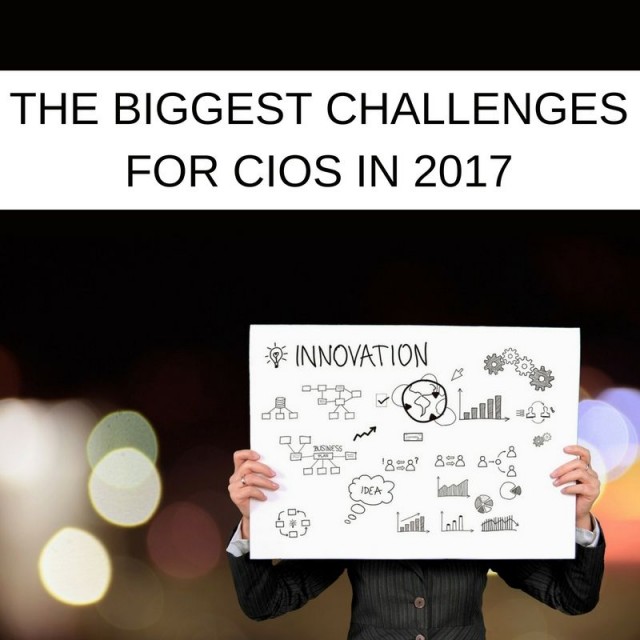 I recently wrote a piece on the apparent lack of CIOs and similar IT professionals at board level of many companies. It followed a thought-provoking article in The Times newspaper that suggested just four specialist technology professionals had made it into the boardrooms of FTSE 100 companies.

While the analysis, carried out by Calastone, acknowledged the key roles played by CIOs in advisory roles and in sub-board level management committees it is a rather disappointing that CIOs don't seem to be joining other C-suite talent at the actual boardroom table.

Based on my annual canvassing of CIO and IT Project Management friends, colleagues and acquaintances on what they think their challenges will be for the year ahead and what industry trends they expect to face together with the recently published Society for Information Management (SIM) 2017 trends analysis, I think 2017 will be a game changer.

So what challenges have been identified for 2017 and how might they be turned into great opportunities?

1 – Alignment of Business / IT

It will come as no surprise that in 2017 business trends and IT trends are expected to become more closely aligned. Business alignment has been a priority for most this decade. In this year's SIM poll it was listed as the top priority for 41.7% IT leaders.

CIOs are increasingly operating in a strategic way and this is being acknowledged by the board with almost half (46.3%) now reporting directly to the CEO. I believe that 2017 will be the year that more CIOs will find themselves being invited to pull up a permanent seat at the boardroom table.

Business reliance on IT is only going one way. I once wrote that IT will shift from "supporting the business" to "being the business" and for many companies, I believe that the time has arrived or will do so in 2017 giving CIOs a huge opportunity for advancement. With this great opportunity comes a great responsibility too. It is time for CIOs to start playing a greater role in setting the business innovation agenda, companies, where CIOs are doing this, are enjoying the benefits of market disruptive innovation and gaining a real commercial advantage over their competitors.

Over a third of IT leaders (36%) polled by SIM ranked security as their top concern - it ranks even higher in my less scientific survey. Amazing to consider that less than half a decade ago, security struggled to make the top ten concerns of IT leaders but it is now a major anxiety. Crucially, it is one shared by many CEOs fuelled by widely reported security breaches.

2016 has seen some high-profile security breaches at companies you would have thought were watertight! Furthermore, I believe that we are currently just ambling down the slip road towards a fast-moving motorway of security challenges. The Internet of Things (IoT) and increased use of cloud could open your business up to new attacks and I believe that the firms who have a CIO at the highest possible level will be the businesses that understand the risk and react the best.

I'm not suggesting that CIOs should exploit CEO anxieties and lack of knowledge of security risks ... but it is an opportunity to increase your stock.

The IT skills gap ranks as the top concern for almost a quarter of IT leaders polled by SIM and in my circle talent is widely acknowledged as the biggest blockage to success. Of course, it's not a new challenge but the speed at which technology is moving is leaving many firms exposed to a widening skills gap.

i) They are leveraging their knowledge of the "as a Service" market to plug any IT skills gaps that could get in the way of achieving their objectives.

ii) They are creating cultures that attract and retain talent. What's more, with IT now "being the business" these successful cultures are being replicated across different aspects of these organisations. Few other department heads can expect to make such a cross-operational impact on culture as IT leaders will in 2017.

In an increasingly digitised economy, businesses that have elevated their CIO (even if not to the board) are enjoying a competitive advantage over competitors. For instance, at one firm where a CIO sits on the board communication of IT innovation and change between the boardroom and employees has radically improved (in terms of speed) making them more agile in the market.

The diverse challenges faced by most CIOs are probably already eclipsed only by those that cross the CEO's desk (I would challenge any other member of the C-Suite community to present a more eclectic set of responsibilities).

Now, I don't think that 2017 will see any of my CIO friends making CEO. That may be a glass ceiling too far!

But the next year will see them taking on even more strategic roles.

It's HIGH time that CIOs got the place at the boardroom table that their responsibilities and contribution deserves.

Sources:
Blog: Why you need a CIO on the board
The Times
Simnet.org
Forbes.com

Merry Christmas and Happy Holidays!
'Chunk it, don't flunk it' and six other IT Servic...