In IT Service Delivery. Failure will teach you more than success 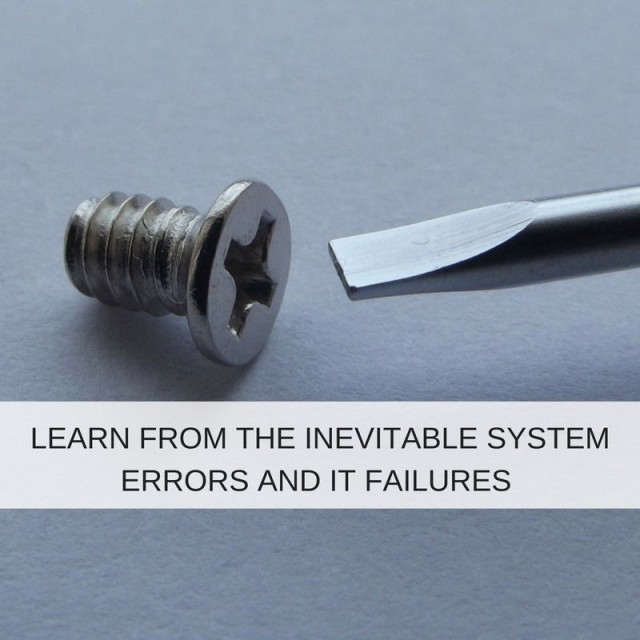 "User error," said the IT Service Delivery Manager to his CEO who was wondering how a few thousand pounds had been missed off an invoice.

The accounts department systems had recently been linked to production and transport and in theory, everything was now fully automated. The system was infallible, except that somewhere along the line someone had omitted to check a box and the final invoice, to a major client, was thousands of pounds short.

The IT Manager started to defend his new system but was cut short.

"When I set up this company delivery notes and invoices were all hand written, in books with carbon paper. Guess how much didn't get invoiced? Nothing! Then we got computers and dot matrix printers and three-ply paper and guess how much didn't get invoiced? Nothing. Nothing ever got missed. Same Transport Manager, same Head of Accounts for the last twenty-six years. Same users ... No errors. New system ... Error! Make the new system work as well as the old ones did."

I've heard similar arguments to this one and you can see both sides. The CEO, having spent a sizeable amount on the system upgrade is understandably cross that it almost cost his firm a considerable amount of money, the IT guys are pulling their hair out that the transport guys failed to check a box that they spent a morning training them to check.

In a way, they are both right but it is probably incumbent on new IT systems to be aligned with the business and its culture rather than the business and the end users having to adapt (too much) to suit the system.

What was especially interesting to me here, though, was the IT service manager's robust defence of the system. Having put blood, sweat and tears, late nights and long weekends into it, he was totally unable to accept the remote possibility that it could have failed to do what it was meant to do.

Not accepting that sometimes it is the system or the delivery of the system that is at fault can be harmful to development and growth. Without acknowledgement of and learning from errors, it can be difficult to progress. Of course, this is contrary to generations of cultural hard-wiring about mistakes and failure. We were taught in school to hang our head in shame when we failed to score 10/10 in a Maths test and that continued for many into the workplace.

Apologies if all of this sounds obvious to you, but I'm seeing trends developing that run counter to my values of transparency and openness and often, it is because of cultural attitudes to failure.

IT talent simply has to be encouraged to fail.

Firstly, because failure is key to progression but also because hiding failure or not acknowledging it can have a negative effect on fault reporting, creating something of a closed loop.

I recently had a look at the IT fault log of a fairly large international company. Almost every IT issue that had caused disruption had been dismissed as 'user error'. One user told me, "I wasn't even at my PC when the system failed. The IT guys are so paranoid about admitting to failure that it's always our fault! In the end, you stop flagging up problems because there's no point!"

Did you notice that the user interviewed referred to 'our fault' - plural - suggesting that the issue had happened to others. Indeed, it had. Each time the case had been closed with a note that placed responsibility for the error at the fingertips of the user. By doing this the IT team missed a great opportunity to drill down and make their system bomb proof!

The end users, in this case, were journalists, the IT team could learn something from them. Journalists try to get as many possible perspectives as they can before reporting. They know that perception (even theirs!) is fallible and influenced by many factors so the best way to reach an objective understanding is to access several different perspectives that they can then compare.

When seeking to understand and learn from your own mistakes in complex IT situations, you too would benefit from working in this way.

It's not just journalists, police investigators gather forensic evidence and eyewitness testimony, doctors study x-rays and test results and seek to listen to what their patient is telling them, scientists record qualitative and quantitative observations during experiments and analyse their data before making a conclusion in relation to their hypothesis but most of all each of them learn from their mistakes. Post Hutton, journalists seek out multiple sources, many miscarriages of justice have led police to improve their techniques and rely more on DNA evidence and science is progressed as much (if not more) by mistakes as it is by success.

Rather than hide mistakes, flaws and errors, I think that the brightest light should be shone upon them. Talking to people within the industry gets you the benefit of their experience. Sharing with the IT community at large may expose you to someone who has experienced a similar issue or error and knows a way to deal with the problem that you haven't thought of.

Most crucially, though, when you take the time to describe what happened you get a chronological and clear breakdown of events. Questions may arise that hadn't originally occurred to you and you get a broader view of the issue.

Finally, and in the case of the journalists this was really beneficial, when multiple users are involved you must hear each individual’s account of events. You may find that each user will put greater emphasis on a different aspect of the situation, based on their paradigm and role, helping you piece together the jigsaw. The closer you get to a complete view of what took happened, the better your diagnosis will be.

Like death and taxes, mistakes, system errors and IT failures are inevitable. Learning from this one equips you with the skills to learn from future ones.

Progress is never a straight line, but then how dull are straight lines. Keep learning from mistakes and ultimately you will have more success than failure, and the mistakes you make along that road to success will all have been worth making.

Could your business could benefit from a Service Delivery Assessment?