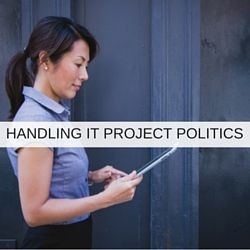 Politics in Project Management is unavoidable. How you deal with project politics though could be the difference between success and failure.

Every office has politics but for project managers, it's often more intense as teams regularly come together for the life-cycle of the specific project and then disband. Less time is spent considering how individuals will ‘gel’ together and more on what they will individually contribute towards the project goal. Well, that's fair enough, but if individuals cannot work in harmony then your project could be in jeopardy before it's even started.

Here are Nine Tips to Deal with IT Project Politics:

As a woman, in Project Management, I think I probably see more politics than most of my male colleagues. It's a male dominated industry and sometimes you can find yourself at the mercy of 'battle of the sexes politics' or 'the politics of low expectation'.

It shouldn't be the case in 2016, but as a woman leading a project - male stakeholders often expect you to fail.

The best way to combat this is to succeed - head up, back straight, stick to the plan and succeed!

In the meantime, take solace from this. A 2007 survey of experienced project managers in the US concluded that female PMs significantly outperform male counterparts in meeting schedule and budget and that female PMs abandon fewer projects than men.

Tell them to put that in their pipe and smoke it!

Most IT Project politicking is centred around the struggle for power.

There should be one winner - the project.

It's important that you create a working environment that is free of ego and free of the feeling that anyone needs to embark on a "land grab" to improve their lot. You can do this by treating everyone as an equal, eliminating favouritism and always doing what is right for the project.

When the project wins - the team wins - each individual wins.

3 - Align Your Project With Your Business Case

You should find that personality politics are almost entirely eliminated by doing this. When your project is closely aligned to business case, disagreements are no longer between individual team members but instead between those team members and the business mission.

Who wants to be that guy?

Who wants to hire that guy?

When the stakes are that high, when throwing a political spanner in the works can be detrimental to your career it's amazing how many PM team members choose to keep theirs in their tool box!

When budgets are tight and timescales are stretched emotions can run high.

Nothing to be ashamed of there - it's you that makes your IT Project live and breathe. Without you and your team, your IT Project is little more than an elaborate "to do list". It's OK that you get passionate about it.

However, when you react to issues and situations you have to remove all that emotion.

A good check is to ask yourself what you're responding to - the issue or the personality. React to the situation, not the individual, with a robust focus on your ultimate project goal and you should encounter less political disturbance.

5 - See It From And Fully Understand Both Sides

Take a coin from your purse. See how contrasting the two sides are.

Now see the narrow edge of the coin that separates them and yet also binds them together - the thin line wrapped around the whole circumference of the coin.

When presented with two views, as diametrically opposed as heads is to tails, you have to make sure that you first fully understand each person's point of view, perhaps rephrasing it back to them in your own words, before deciding on the way forward.

You have the helicopter view of the IT Project and when individuals feel that they have been heard you stand more chance of persuading them to buy into your decision - even if it doesn't go their way!

6 - Project Management As A Service

The quickest and most effective way to depoliticise project conflicts is to remove the Project management function from the internal cauldron.

Often a third party Project Management consultancy can succeed where in-house PMs cannot because, well frankly, they don't care about the politics. They just care about the outcome.

You don't have to abdicate full control and arrangements can be made to measure but in my experience, people are less likely to cause a scene in front of 'professional strangers'

It's not just internal office politics that can derail you. Client/Stakeholder/Sponsor politics can be a minefield. Never walk into a mine field!

As Head of Projects, I tell my Project Managers to stay out of client politics. You may know, as a parent, the folly of wading into an argument between your child and their siblings or friends - before you know it they've made up and you're left looking like the bad guy! It’s the same with client politics – you will never come out unscathed.

Sometimes, client politics can mean the client playing their 'customer is always right card', either trying to gain extras that weren't part of the original project mission or to pass the buck when they haven't delivered on a promise or agreement.

In the first instance politely and calmly explain how their demands may adversely affect the agreed delivery outcomes.

In the case of buck passing become a master of heat extinguishing apologies, for example, "I'm sorry, I should have chased you for that answer [you promised me last week]" or "Sorry, perhaps I should have been clearer about that [bit of required stakeholder input that we'd both agreed].

Even if it’s not your fault, a quick apology that diffuses the ticking blame bomb can allow a project team to get back to achieving project goals.

DECLARATION OF INTEREST. I am a female Project Manager.

When Deborah Kolb, a foremost authority in the fields of negotiation, leadership, and gender, studied women as "peacemakers" in organizations she found the following.

Not only do women often naturally act as informal peacemakers within their organizations, they are actively sought out by their co-workers. They provide a sympathetic ear, are loyal to the organisation but also care how the organisation treats its people.

They provide support for people to tell their story, re-frame peoples understandings of the situation, translate individuals' perceptions of each other, and they arrange opportunities for private conflicts to be made public and get sorted.

Deborah Kolb found that more systemic or structural conflicts may be individualised and depoliticised by a woman's approach to peacemaking.

62% of CIOs are finding it difficult to recruit ta...
FIVE ways to refocus your IT Business Service Deli...