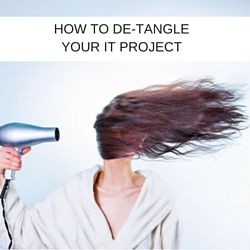 I was just asked to cast ‘an experienced eye’ over an IT project that had gone off the rails.

"I think it needs more governance," the project's sponsor told me.

What I found was a familiar sight, a project that was not failing through lack of governance but instead a lack of simplicity. The project was a confusing spaghetti nest of complexity and each tangle upon tangle was strangling the life out of it.

It reminded me of my daughter's hair some mornings! Some days, before a dance class, for example, my wife has to take a de-tangling brush to it and my daughter's pained expression is not dissimilar to the look on the faces of this project team when I arrived to help.

Could there be a de-tangling brush for IT Project Tangles?

I think there is - but first here are some of the tangles that had occurred within this project.

Tangle 1 - Poor Design of the Plan

Often, projects are designed to fail - or at least they're not designed not to fail. When we looked at how this project had been planned you could see what went wrong. In common with most projects the plan was designed using a popular project management tool that, as soon as you open it, presents you with a task list. Like so many Project Managers, the guys on this project had eagerly started to load tasks into the system without proper thought about project outcomes, lines of reporting and responsibility.

The result was that they hit the ground running but not necessarily all in the right direction. Things on the ‘stuff to do list’ were getting ticked off but they weren't always the right things to advance the project towards its desired outcome.

On successful projects, clear lines of responsibility and reporting resemble a neat and tidy spider's web. Imagine a spooky cobweb on a haunted house in a movie, layered with dust - that was how a map of the lines of responsibility looked on this project. A request to talk with who was responsible for individual aspects was met with blank looks - tasks had not been clearly delegated.

No-one was responsible so ultimately no-one was ‘response-able’ – when things slid off course no-one was taking it upon themselves to put it right because no-one knew whose remit covered what!

It soon became clear that each of the individuals working on the project had a slightly different view of what the project had been conceived to achieve. I mean, they weren't massively wayward in their perception but it was like hiring ten decorators to paint your living room green, letting them individually pick their paint and then wondering how you ended up with ten different shades of the same colour on your wall. This project was on course to achieve varying 'shades' of its intended outcome.

Outcomes must be clear, communicated and used as a measure of the project’s progress throughout its lifecycle.

"Keep It Simple Stupid" - how many times have you heard that? The Project Managers' mantra was one that the guys working on this project knew by heart. The problem here was that, along the way, too many changes had been made without due business case consideration. Stakeholders had pitched in ideas probably starting each suggestion with, "It would be nice if ..." or "Wouldn't it be good if ..." and the project team, eager to please, had accommodated them. Looking at it from a helicopter view the additions were actually (mostly) great ideas but were big enough to warrant being projects of their own rather than being tagged onto and hindering the original mission.

The team selected for this project were all competent Project Managers, but none of them had ever handled a project of this size and scope. Looking back, failure could have been predicted based on this lack of proven experience. In some respects, their plucky underdog spirit is to be admired but that cuts no ice with a Finance Director when you are called to explain a significant budget overrun. Now that Project Management tools and people are available as an on-demand, pay as you go resource – there’s no excuse.

That's just five tangles that this project found itself mired in.

It's not alone. When Gartner looked at over 50 projects that had either completely failed, were seriously compromised or which had massively overrun their IT budgets, they concluded that organisations’ failure to address complexity in the business process was the main reason.

Complex, tangled projects with either unrealistic goals, unproven, inexperienced teams and little or no accountability is sadly a common landscape. It leaves a project where no-one is mapping the route to success and no-one is responsible for its failure.

The solution, the detangling brush for IT Projects is to look around the growing market for 'Project Management as a Service'. These days almost every element of the PM process can be brought in to complement your own in-house capability.

If you encounter a project that is beyond your present capability and experience, it's better to acknowledge that rather than try to fake it! These days, as well as individual key elements, the process of Project Management itself, can even be outsourced for projects that are way out of your comfort zone. My tip would be to buy in the Project Management function as a service but be a knowledge sponge throughout the lifecycle, equipping yourself with extra capability for next time. Of course, you might enjoy the freedom to concentrate on other aspects of your role that outsourcing day to day project management allows and decide to always work this way going forward.

If your IT project is failing, before introducing more governance or more reporting, think whether de-tangling the complexity of your project might be worth a shot and consider having a third party take a look it because sometimes it can only be an independent pair of eyes that can spot the really obvious.

DevOps | The biggest challenge for the multisourci...
You’ll read many statistics about why IT Projects ...