Project Manager - which superpower do you have? - Stoneseed

Project Manager - which superpower do you have? 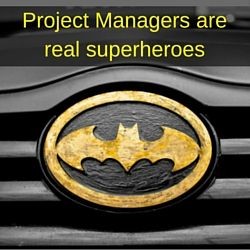 At the start of this month, I read a nice article from Kiron Bondale entitled "What Superpower Do You Wish You Had As A Project Manager?"

It made me smile because as Kiron writes, "Project managers are often asked to perform miracles, so they can be forgiven for occasionally wishing for magical powers to be able to bend or break the laws of the universe. After all, that’s what sponsors must believe them capable of doing when they demand scope, schedule & cost constraints in advance of sufficient planning!"

Nice one Kiron! I've thought about it a lot and something has dawned on me.

The subject of mythology for centuries, the stuff of science fiction fantasy and the holy grail of many a scientist, time travel is being achieved on a daily basis by Project Managers. Take this project that I recently consulted on that despite being hopelessly behind schedule, and late at every milestone, simply had to be delivered by the agreed date. So harsh were the financial penalties for failure that late delivery just wasn't an option but completion by the date agreed was impossible.

Except that the Project Leader found a way to bend time, three months of intense project work were completed in half of that to everyone's satisfaction.

He did two things.

Firstly he took an overview of everything his team were involved in. There were other projects that had similar 'deadlines' to this crucial project but they were arbitrary and none of the other projects were business strategy critical. He negotiated new delivery dates for the non-critical projects and released resources that could be used on the A list mission.

Then, he leveraged Project Management functions that were available 'as a Service' that could be bought in, and without significantly altering his budget was able to take advantage of key skills that were not part of his team's in-house toolkit. This also freed in-house resources allowing the internal project team members to play to their strengths.

Working smarter than before the project timeline quickly began to mirror the forecasts and the project delivered on time.

I am always impressed by the Project Managers who somehow find the energy to power through late nights and long weekends to get the job done. These are the real superheroes.

IT Projects can take a lot out of you, the physical tiredness from burning the candle at both ends and the mental exhaustion that often comes as part of the project would be enough to leave mere mortals gasping for breath.

Just make sure that you find time to achieve a balance and spend quality time with your family when you can.

Project Managers somehow find a second, third and fourth wind. I find the burst of energy that comes, as if from nowhere, when you can see the finishing line is one of the most exhilarating parts of the job.

One of my friends who is both a marathon runner and an IT Project Manager describes the latter as the toughest of the two. I've decided to take his word for it but can fully understand how the two are comparable - both long and often lonely tests of endurance.

I'm amazed there isn't a superhero from movies or comics who can do this - I always thought it would be a cool superpower.

And I bet Project Managers could do it if put to the test!

After all, you can feel like you're drowning - submerged in budgets, scope changes, deadlines, stakeholder expectations ... etc, etc and enough stress and pressure to sink a battleship! I'm struggling for breath just thinking about it.

You deal with it all calmly and with measured thought and reaction. That's impressive.

The number of late nights that turn into early mornings - You must have this!! One PM friend of mine regularly works on his laptop while his wife sleeps beside him - he can't turn on the light on or she'd wake so I can only assume that he has developed night vision. Before you suggest it's the light from the laptop screen, he has - he tells me - never stubbed his toe in the dark. If that's not proof of night vision then I don't know what is!

I was chatting to a CIO about a Project Manager recently about how this particular member of her team seems to anticipate the needs of the business and have an IT solution almost ready to implement. We joked it was telepathy.

Actually, I believe the super power that this demonstrates is precognition - the ability to predict the future.

The best Project Managers see beyond their current project workload and predict future needs based on their understanding of the business strategy. They also anticipate issues that team members may encounter along the way and efficiency problems caused by lack of resources or the best skills for the job and they buy in Project Management resource from outside to compensate.

At all levels ... With their team, end users, stakeholders, board members - always the same result...

The Project Manager gets his or her way.

Of course, it's down to having a toolkit of negotiation and communication skills - but what's that if not mind control?

If you weren't so busy managing projects you could probably take over the world!

You may not live forever but the legacy of what you achieve today will resonate forever within the IT infrastructure of your organisation and if you really get it right, that of your competitors.

The IT legacies of Steve Jobs and Andy Grove are plain for all to see but the problems that you wrestle with today and the solutions that you find will have a life beyond your career. Shared experiences through social media and on tap solutions from outsourced Project Management mean that best practice in the UK is being replicated in China.

A hundred years from now a Project Manager in Silicon Valley could benefit from a solution that you came up with at 3am while your wife sleeps beside you.

So that's just seven super powers that I think IT Project Managers possess in great abundance ... the plan for the year ahead should be to work on flying ... and as the wind and rain lash against my office window, perhaps atmokinesis.

In the meantime, don't ever let anyone tell you that you're anything less than a superhero. I, for one, salute you.


Contact us to learn more about how Stoneseed's Project Management as a Service can give you access to project management staff, resources and tools at a flexible and predictable cost via a fully structured managed service.