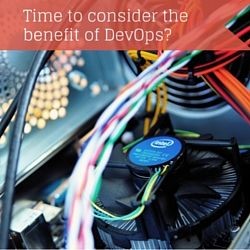 There's a really interesting article by Stephanie Overby at cio.com about organisations experimenting with new DevOps application delivery methods, but using in-house delivery talent because they’re not yet convinced that their IT service providers are up to the job.

I believe that this is the biggest challenge for the multisourcing sector in the next 24 months but also its biggest opportunity for growth and a real opportunity to showcase what it does best - delivering results faster, cheaper and better.

Gartner says that by 2016, DevOps will evolve from a Niche to a Mainstream Strategy employed by 25 Percent of Global 2000 Organizations.

According to Stephanie Overby, citing research by outsourcing consultancy Everest Group, less than "10% of application services agreements in 2014 required DevOps-based delivery. Yugal Joshi, practice director at Everest Group, reportedly sees this as an indication that enterprises are not convinced that their current outsourcing partners can play a “meaningful role” in adopting the new DevOps delivery methods.

By way of definition, DevOps is a movement resulting from operations and development engineers participating together in the entire service lifecycle, from design through to the development process and into production support. As one development manager put recently, "It's like Agile - but Bionic".

Indeed, DevOps complements Agile development and ITIL-based processes across IT operations rather nicely. It is really an extension of Agile and ITIL - so why, if Stephanie Overby is right, are enterprises reluctant to outsource DevOps?

Research by the Everest Group indicates that moving from an agile development model to DevOps is the single most important trend in application services and that most IT organisations are doing so using their own internal talent rather than leveraging their existing outsourcing arrangements. Why?

It is hard to get your head around DevOps and this has resulted in a certain degree of introspection, internal head scratching and from the ground up transformation - leaving many outsourcing partners out in the cold.

DevOps practices are increasingly better connecting enterprises with their customers. With greater agility comes greater reactivity and proactivity. Companies like Amazon, Facebook and Google are harnessing the speed delivered from DevOps investment in talent, technologies and processes to drive greater business results.

CIOs and their teams engaged in application development and IT operations are having to re-imagine what it is that they do. Legacy methods are not enough, in this new age, when delivering business IT services "faster and cheaper" is the call. CIOs and their teams who begin to embrace DevOps practices will learn how they can be harnessed to drive speed, quality and better business outcomes from the delivery of IT services. How?

By creating a DevOps team you can create a culture of cross-discipline collaboration. Established silos are either demolished or bridged and a single team, often compensated equally on a basis of shared performance goals emerges. Instead of a relay, where a service or project baton is passed from department to department everyone is responsible for a single service, from development, deployment, and throughout lifecycle management. And crucially, everyone is directly responsible for and to each other.

IT teams are still figuring out DevOps for themselves and as many stakeholders across the value spectrum need to be aligned to make it fully work many enterprises have pulled up the drawbridge on their previously trusted outsourcing partners. Such cross-enterprise alignment is often easier imagined than actioned - it's quite a change and while that change takes, while IT teams and leaders find their feet they are huddling together and looking inwards.

That will change because this all sounds a bit familiar.

The onus now and in the near future is on outsourcing service providers to demonstrate their value in the DevOps space.

Think about the proven benefits of multisourcing.

Yes! It may be that DevOps is just multisourcing rebadged, it may be that it's an extension of the already extensive commoditisation of IT, it might even be that it's the Emperor's new clothes but in the short-term outsourced service providers have to accept that as buzz words go this one has taken hold and their traditional business delivery method may not be enough. Actually - that's not true their traditional business delivery method is fine - you just need to communicate your task specific capabilities better and show a willingness to collaborate with different service providers to achieve better business outcomes.

Providers with a multisourcing pedigree already have service integration capability running through their DNA and now is the time to start shouting about it as they are best positioned to take full advantage of DevOps deals and drive transformation.

Wikipedia sums up DevOps rather well. "DevOps (a clipped compound of "development" and "operations") is a software development method that stresses communication, collaboration, integration, automation, and measurement of cooperation between software developers and other information-technology (IT) professionals." Funny because that also rather neatly describes multisourcing too.

Rather than pull up the drawbridge on your multisourcing partner when you consider the benefit of DevOps - bring them in at the earliest stage - you might find what you're just getting your head around - they've been doing for years.

Find out more about Service Delivery Assessments from Stoneseed

Sources:
cio.com: IT customers slow to embrace outsourced DevOps
Gartner Says By 2016, DevOps Will Evolve From a Niche to a Mainstream Strategy Employed by 25 Percent of Global 2000 Organizations

The 4 Must Achieve Goals To Make Cloud Leading To ...
Five tangles that could really be damaging your IT...