For The IT Department, It's The End Of The World As You Know It Or The Dawn Of A Brave New Era. And Ultimately You Get To Choose 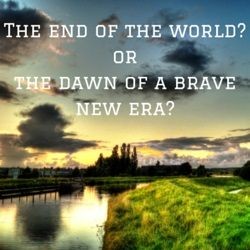 For the IT department, it's the end of the world as YOU know it or the dawn of a brave new era. And ultimately YOU get to choose!

It’s either the end of the world as YOU know it or the dawn of a brave new era – depending on where YOU stand on the readiness spectrum!

In their recent worldwide survey of 1,300 IT leaders, Vanson Bourne 1 asked how the role of IT is perceived within their business now, and most interestingly how it will be changing in the years to come.

What became clear was that, thanks to the commoditisation of IT, other departments within most organisations are now asserting their independence from the traditional IT department and they are procuring IT services, technology and apps etc. themselves.

Here are three questions for the IT leaders who were surveyed, and those who weren’t;

... to ensure that your department, indeed the very concept of an IT department at all, remains a relevant and necessary function moving forwards.

To highlight the evolution that is taking place, Vanson Bourne’s survey1 reveals 39% of IT leaders say that their IT department now acts as a “service broker” or as a consultant to other core business departments rather than as a traditional and exclusive supplier of all their organisation’s IT services.

This “new spend” is outside the control of IT and this poses problems, challenges and with a positive head on – opportunities for IT leaders.

According to the Vanson Bourne report, 35% of spending on IT now happens outside the IT department itself and the prediction is that by as soon as three years from now this will have grown to 44% - almost half! Trends like this accelerate fast and even drawing the line mentally, it is not beyond a reasonable imagination to suppose that within five years to a decade most IT spend could be conducted in this way – out of your control.

So where does that leave IT?

Go back to those three questions.

Those that saw this coming have already repositioned themselves as drivers of the change, they anticipate needs on a business case level and they are champions of innovation for the various departments within their organization. Paradoxically, although the IT spend that they themselves sign off has shrink, their influence on how it IS spent has grown.

Governance is a key area too.

As individual departments have sought to flex their independence muscles more technology and software is being added to their organisations’ IT estate. This is all well and good – indeed there is a huge benefit to the department that will use the technology sourcing it themselves so that it exactly fits their day to day needs on the “field of play”.

... to avoid complex spaghetti nests of IT forming by the trend towards “IT by addendum”, clever IT Project teams and the canniest IT leaders have positioned themselves as IT police officers, they have become governance enforcement officers. They have identified that the IT world that they created has changed and is now, for example, only as secure as its weakest link, whether that is a gadget that has brought the Internet of Things into the organisation or a new piece of software that finance is running to manage expenses – they have proactively read up, researched and got inside the head of “immigrant” technologies.

They foresee problems, fix bugs and when the new tech goes wrong, rather than standing arrogantly at the door with folded arms and an “I told you so face” – they fix it – quickly. Or they have the number of someone who will. They look like heroes.

As one IT Project leader put it, “As Finance, Purchasing, Transport were all becoming these smug little independent states we were expecting a call to say we were redundant. Then the accounts office bought an app that we knew would not be compatible. We protested, we were over ruled and inevitably, of course, it failed. From then we were back in the game. They are still all like independent states but we are like the FBI!”

In both these cases the IT departments have become “interdependent”, more business case aligned and actually increased their influence within their business to way beyond where it used to be.

Back in the day the IT department was like the Wizard Of Oz, hidden from view behind a curtain. Individual departments seeking independence and autonomy could have been the end for the IT office but actually ... by repositioning themselves, turning their sails into the new wind – they have become more vital than ever.

Some have gone it alone, some have “cheated” and found an IT multisourcing partner to give them all the answers and the support that they need – they magically have the solution at their fingertips, and some to date haven’t done anything at all.

Those that have done nothing should act now, the time to increase your influence is when you still have some influence left to increase, before that 35% spend beyond your control becomes 44% and everyone even forgets you exist.

IT leaders must better align themselves with their business’ culture and the intentions and objectives of the boardroom to navigate this changed and still changing terrain.

Contact us to learn more about how Stoneseed's IT Advisory Services can help you to ensure best value and align IT to business goals.

Find out more about IT Advisory Services from Stoneseed

Source: 1 TechInsights Report: The Changing Role of IT and What to Do About It

Valuable IT Lessons That Can Be Learned From RBSs'...
Knowing When To Say No